From the Bicycle Barricade: 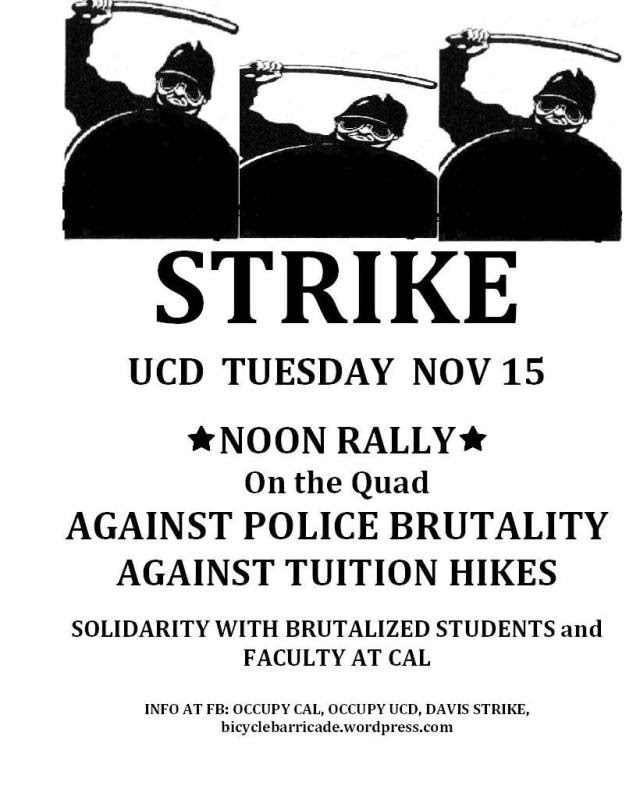 When we protested, they told us to go to Sacramento.

When we refused to be misdirected, they beat and arrested us.

When they told us we couldn’t change anything, some of us believed them. After all, the fees kept going up. But some of us kept fighting. We occupied buildings and highways, we confronted the cops they sent to hurt and intimidate us, and we kept talking to our friends.

And some of our friends listened. The nationwide Occupy Wall Street movement draws inspiration from the California student movement begun in Fall 2009. The slogan “Occupy Everything,” once derided as absurd or vanguardist, is now on everyone’s lips. And when the Occupy movement came back home to the University of California last week, the administration responded with violence, sending sheriff’s deputies onto the Berkeley campus to beat students engaged in non-violent protest. A student was hospitalized, and several others came out with bruised and broken ribs.

Berkeley Chancellor Robert Birgeneau justifies his actions by claiming that the students, when they linked arms to counter the threat of violent dispersal were themselves “not non-violent.” In other words, the forming of a human chain is now declared to be an action which forces police to break students’ ribs with batons. This is the familiar logic of the authoritarian mind employed by abusive parents to justify the harm they inflict on their own children—”You made me do it. I had no choice.”

But we are not children, and we will not stand for this. We know by now that the only thing that has restored state funding, even temporarily, to the University of California has been the threat of student protest. We know that the only reason the regents have tabled their planned mid-year tuition increase is the threat of student protest. And we know that what the mis-managers of this institution fear most is when we stand together and put our bodies on the line to say “Stop!”

Last Wednesday, after being brutalized by the police, 3000 students and faculty at Berkeley rallied and called for a system-wide strike. This Tuesday we will walk out of our classes and strike in solidarity with our friends and colleagues across UC campuses. We demand an end to police violence and an end to the systematic looting (privatization) of our public universities.

For two years we’ve been chanting “Our University!” It’s time for us to prove it. Faculty, students, and workers: Join us at noon this Tuesday, Nov 15th, on the Quad, to renew the fight to take it back.
Posted by d at 11:09 AM