Qualified Criticism: What Is A "Good" Administrator For? 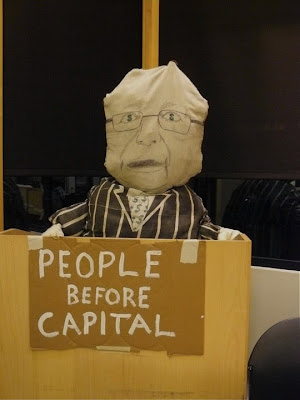 Yudof, we have to admit, was eminently “qualified” to be UC president. His “qualifications” were what allowed him to declare a state of fiscal emergency and orchestrate the subsequent 32% tuition hike. When Yudof became UC president, in-state tuition was $7,126—now it’s $12,946 (that’s an overall increase of 81%). It was because he was “qualified” that he treated workers as obstacles to efficiency, cutting their salaries and firing them essentially at will. For Yudof, faculty had no role to play in terms of shared governance but just stood in the way—“being president of the University of California,” he famously told the New York Times, “is like being manager of a cemetery: there are many people under you, but no one is listening.” For the same reason, he saw students not as an integral part of the university community but as a threat, consolidating a police force that consistently surveilled, harassed, threatened, and arrested them, beat them with batons, and shot them with rubber bullets—and even, on one occasion, with live ammunition. He was so “qualified” he was paid more than $800,000 a year to do this.

These days, as Yudof departs from the UC system, nobody is talking about such things. It’s all roses and tears—at yesterday’s regents’ meeting, he delivered his final, heartfelt statement. But the bottom line is this: Yudof was extremely “qualified” for the job, and he performed rather “effectively.” That is to say, he did the job that the president of a university is supposed to do. Privatize, corporatize, neoliberalize, financialize, whatever you want to call it, he did it—the University of California is a very different university today than it was five years ago when Yudof arrived. He was a “qualified” administrator and for that reason an “effective” president. And that’s exactly why we fought him at every step of the way. Because the university is not meant for him, or for the throngs of parasitic deans, deanlets, and deanlings who applaud and implement his directives. It is meant, rather, for students and workers, those who, as our comrades used to say, use it.

“Qualifications” mean only that the administrator is better at his or her job of restructuring the university—what it means is a great deal of experience at confronting, misdirecting, and neutralizing those of us who are standing in the way of the so-called “future” of education, the all-administrative university. We should not be calling for “qualified,” “better,” or more “effective” administrators to rule over us, police us, cut our salaries and benefits, fire us, raise our tuition, cut our classes, and make us miserable. We should be pushing, instead, for a university without administrators. Cut the head off the king!
Posted by d at 8:13 AM No comments:

Since the UC regents’ pick for Mark Yudof’s replacement was announced yesterday—and after getting over the shock—folks have raised a number of important objections. One such criticism is that Janet Napolitano is not qualified for the position, since she has never worked at a university in any capacity. The objection hasn’t been helped by the UC’s notoriously incompetent public relations machine, which clumsily identified the fact that her father was the dean of the University of New Mexico’s medical school as a clear sign that “a passion for education is in her DNA.” This claim, to say the least, does not inspire much confidence in the regents’ decision.

But this criticism carries some problems of its own. As others have pointed out (and most of the ideas laid out here are borrowed directly from the linked conversation), the notion that Napolitano’s lack of educational qualifications should exclude her over and above anyone else turns on a highly romanticized idea of the university as an institution dedicated primarily to education and run, therefore, by its educational employees, the faculty. However appealing this vision of the university is to many faculty today, and however true it may once have been in some decidedly utopian past, the fact is that today the university is not primarily an educational institution. As in the case of the conventional criticism of the “corporatization” of the public university, the answer here is pretty much the same: the university has already been “corporatized,” and it has never really been “ours.”

These days, the public research university is run not by its faculty or even its president but its CFO. It is not that Nathan Brostrom, the UC’s Executive Vice President for Business Operations, actually calls the shots when the regents sit down together at the table, but rather that he (and others like him) lays out the conditions in which every decision, from tuition hikes and out-of-state admissions to taking on debt in order to finance construction projects, will ultimately be made. As the university becomes more and more leveraged, its marching orders will increasingly come from Wall Street, which for its part is simultaneously reaping enormous profits off the securitization of student debt.

At the same time, Napolitano does signal a change, the recognition that it is no longer “business discipline” but “martial discipline” that is key to the university’s continued operation. It is an acknowledgment that the university in general, and the UC in particular, will continue to be a site of struggle. If the Occupy movement drew heavily from the student occupations of 2008-2009 in New York and the UC, perhaps Napolitano’s arrival reflects the state’s recognition of the possibility that struggles over the university can resonate and explode in unsettling and unpredictable ways.

UC President Napolitano, in other words, could be seen as presiding over the first fully “securitized” public university, in the dual senses of the word. Of course, the university has long formed part of the military-industrial complex. Napolitano’s appointment is meant to double down on the UC’s turn to federal research dollars and weapons development. The Washington Post’s article originally stated that “the university’s search committee was drawn to her experience in Obama’s Cabinet, believing that she might help the UC system advance its federally funded programs, including . . . nuclear weapons labs.” (Strangely this sentence, which we tweeted yesterday, seems to have been silently removed, although it’s still quoted in this piece in the Examiner.) Likewise, Napolitano is not the first member of the United States’ security apparatus to become president of the UC. Charles J. Hitch, who served as Assistant Secretary of Defense from 1961-1965, was appointed UC president two years later and served in that capacity for eight years.

But the specificity of Napolitano, perhaps, is seen in the convergence of these two forms of “security,” one financial and the other repressive. If our classic slogan “behind every fee hike, a line of riot cops” responds to the intimate ties between austerity and policing, the violence of financialization clarified and crystallized in the UC regents’ decision suggests that the terrain of struggle, while structured in many ways by continuities, has shifted in important ways. Maybe it's time to update that slogan.

(Image borrowed from UCMeP)
Posted by d at 4:18 PM No comments:

Whereas City College of San Francisco (CCSF) is a critical part of the public education system in California, it is the largest public community college in the State of California (90,000 students) and has been a key public good accessible to working class San Francisco residents, people of color, immigrant students, and those seeking adult education opportunities in the city.

Whereas the recent privatization of public education in California and nationally has taken many forms, from the closing of elementary and secondary schools, the imposition of charter elementary schools, the raising of fees at colleges and universities, the reduction of course offerings at community colleges, and the imposition of layoffs, pension reductions, and furloughs for workers at educational institutions.  These transformations have coincided with rising student debt levels and the financialization of such debt, as well as the expansion of for-profit education institutions, which have very low graduation and placement rates and engage in fraudulent advertising campaigns that particularly target working class communities of color.

Therefore, be it resolved that the UC Student Workers Union (UAW 2865) stands in solidarity with the students, instructors, and workers of CCSF, and with the unions and organizing groups that have been standing up in defense of city college.

Be it further resolved that the executive board of UAW 2865 will encourage members of the union to participate in upcoming actions in defense of city college, including the march to the Department of Education scheduled for Tuesday, July 9 at 4pm, and the letter writing campaign to the ACCJC.

Be it finally resolved that the UC Student Workers Union calls on the management of the University of California (particularly the Chancellors of UC Berkeley, UC Davis and UC Santa Cruz, and the Office of the President) to speak publicly against the decision of the ACCJC and in support of the continued accreditation of City College of San Francisco.

Approved in a straw poll of members and officers present following a quorum call at the July 7 Joint Council meeting; statement to be finalized by the Executive Board.
Posted by a at 7:55 PM No comments: