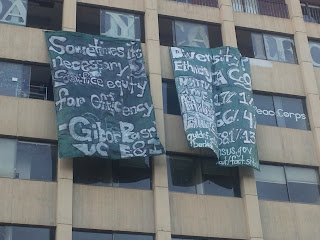 Until we have more than speech and linked arms at our disposal...

The following speech was given by Professor Geoffrey O'Brian on Sproul Plaza, during the walkout on November 8.

It feels good to be with you.

I could write that sentence ahead of time because I remember what it feels like from other moments when we’ve come together to risk saying what the Regents and the administration would rather we didn’t even think, let alone shout. Most sharply, I remember this feeling from last November 9th, when we gathered to protest what we still have before us to protest. I remember what it’s like to protect strangers like they are the only people you know; to establish a line and hold that line while the Alameda Sheriff’s Dept. wades in with batons in obedience to an absent Chancellor. Our line didn’t last very long that day, but it lasted longer than a police line would last if it didn’t have guns and gas, shinguards and faceplates, sound cannons and an afterlife in false charges and malicious prosecution.

The powers that would like to take the public out of public education don’t have our conviction, they have greed plus an arsenal; they don’t have community, they have closed-door meetings and staging areas. And as their cops hit us last year they were also striking at what we expressed in the linkages of our arms. They were jealous of our resolve and unhappy to be reminded it’s possible. They were unhappy we didn’t have names and serial numbers on our chests. Which is why we felt good even then and can feel good now as we gather (despite their having tried to turn on the rain machine and the cold). This feels like living. This feels like not being in debt.

The Pakistani poet Faiz Ahmed Faiz, in a poem about the necessary bravery and the certain vulnerability of the protestor, wrote a line that has stayed with me for years: “Come today in fetters to the marketplace.” That is, bring your problems back to their source, bring them as part of what you offer and are, bring your discomfort with leaving privacy behind. Because doing so might make the marketplace simply a place, a place where a public can dream itself back into being and out of the prison of only private lives. In our current struggle here, for “fetters” read debt, for “marketplace” read the rapidly privatizing university, pricing out the poor, and turning as ghostly as an online education pilot program. But for “today” still read today, the only day available to us again and again, the only day between us and the wrong future, the day wherein we gather to see the first person break its fetters and go plural. We need to strengthen and populate that plural until we can do more than protest, can instead refuse things and have our refusals be more than symbolic. Until we can claim and keep the Gill Tract. Until we have more than speech and linked arms at our disposal.

That we are not that many yet is hard, but it isn’t as hard as not trying would be. This is what we have -- after Proposition 30 has passed, which I’m glad of, but which is a bandaid, written by the governor to tax the rich less than the proposed Millionaire’s Tax would have and which swaps some of the burden to the working class through a sales tax increase. This is what we have, with a new Chancellor and UC Police Chief on the horizon from whom we can expect nothing but more of the same; while intellectual property is sold to British Petroleum and campus child care is outsourced to a Bain subsidiary named Bright Horizons, and staff are laid off and furloughed, this is what we have. We have each other, now, today, in the rain. But this is living rather than seeking not to. This feeling, as solidarity becomes purpose and it runs through us, is what we have, and it has to be enough. Keep coming, and bring your fetters with you. 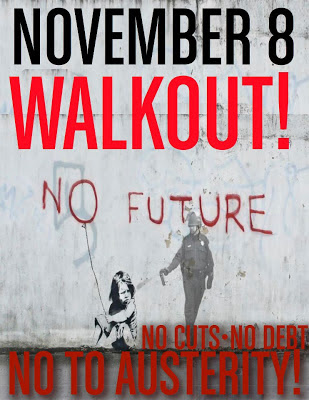 In anticipation of tomorrow's walkout at UC Berkeley, we will be holding the third Debtors' Assembly tonight on the east lawn of California Hall, from 5-6PM. Joshua Clover will be among the speakers talking about approaches to resistance. There will also be a a collective discussion.

Debt is a permanent feature of most of our lives. Yet the socialization of risk debt isolates individuals, locking us in the private misery of our dealings with banks and creditors. Medical debt, student debt, consumer debt, foreclosures -- these social forms mark so many personal failings and moral obligations, we are told. Debt, in other words, not only insures our continued servitude to the corporate pursuit of dwindling private profits. It also serves to alienate us from one another and foreclose the possibility of collective resistance.

Debtors’ Assemblies, then, are a first step in fighting back to reclaim our stolen futures. Please join us Wednesday, November 7 at 5pm in front of California Hall for our last Debtors’ Assembly to learn more about the many forms of debt and discuss ways to resist debt’s claim upon our lives.

And remember, tomorrow (November 8) is the walkout and sleepout on campus.
Posted by d at 9:21 AM No comments: 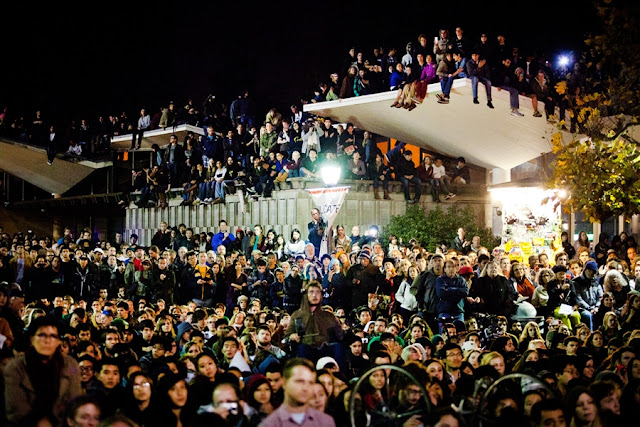 Meet up at Sproul Plaza, Noon.

Public education in California is facing a severe crisis. State budget cuts and austerity measures have accelerated administrators’ efforts to privatize our public colleges. This November, UC Regents and CSU Trustees plan to submit our universities to radical, privatizing reforms.

Even if Prop. 30 passes, in the best-case scenario, it would only maintain the status quo; meaning excessive fees, under-funded programs, overcrowded classes, layoffs and pay-cuts for campus workers, and an ongoing process of privatization. And that’s the best-case scenario! This would preserve the UCs as inaccessible for tens of thousands of low- and middle- income students, and for already under-represented students of color. And for those who do make it in, a lifetime of debt awaits. University privatization also involves attacks on public sector workers, from pension raids to mass layoffs.

The future of public education is bleak, unless we act in the present to prevent the indebting of students and the walling off of our public institutions. By taking collective, mass action this fall, we can begin to reverse the waves of fee-hikes, course reductions, budget cuts, and layoffs.
Through collective struggle, we can defend and sustain public education in California, and we can counter state austerity.
Event Page