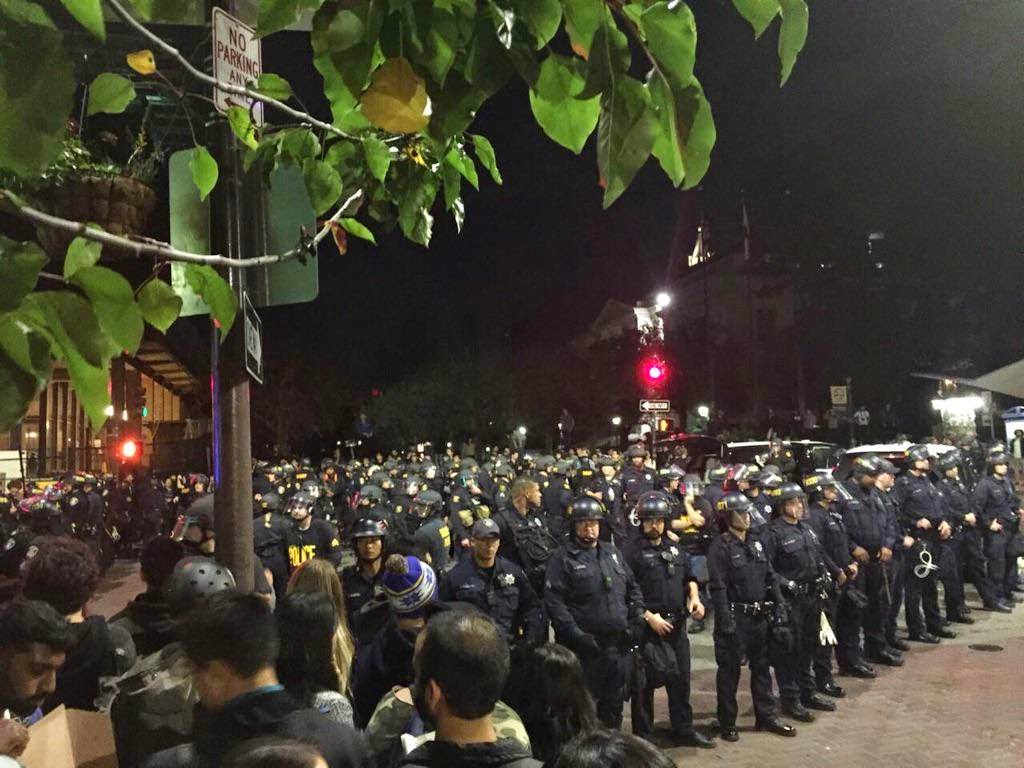 The germ for this presentation emerged as I was reading Ruth Wilson Gilmore’s Golden Gulag. Her second chapter argues that the prison construction boom in 1980s California was a response, on the part of those managing capital and governing the state, to four surpluses, including of capital, labor, land, and state capacity. With respect to capital surpluses, Gilmore shows how investment bankers, in search of profitable sites of investment, developed new financial mechanisms in the early eighties that enabled debt-financed prison construction to go forward without voter approval. These new financial mechanisms, called lease revenue bonds, had recently been put to use as well for the funding of construction projects at California colleges and universities.

In what follows, I want to talk a bit about these convergent shifts in prison and university financing, which Gilmore reads as ruling class responses to the protracted economic crisis of the seventies. While formally similar in certain respects, these parallel shifts also indicate a tilting of the state toward policing and incarceration and away from direct support for education and other socially reproductive state functions. I’m interested in the aftereffects of these shifts, and particularly in what has changed over the last five years, following the crisis of 2008 and recent waves of struggle.

With respect to the universities, Gilmore describes how, in 1981 and ‘82, Frederic Prager, a well-connected underwriter in California, “worked with the Association of Independent California Colleges and Universities to issue an innovative revenue bond whose proceeds [constituted] a forward-funded market for student loans” (98). Soon afterwards, the loan arrangement was extended to public universities as well. The terms of this particular revenue bond illustrate some of the emergent parameters of university financing in the early eighties.

At this moment, newly available student aid and loan money – funded and backed by state agencies – provided an incentive for universities to gradually increase tuition, and thus enabled them to secure the unencumbered revenue necessary to undertake debt-financed construction projects – projects that university managers justified on the grounds that new construction would help them compete for students. Prager and his associates at KPMG helped rationalize these new financial dynamics, publishing manuals of “best practices” for university managers. Their 1982 “Ratio Analysis in Higher Education” presented its readers with financial “ratios” that could be used to determine the proper balance of university revenues, operating costs, investments, and bond debts. Unsurprisingly, these apparently neutral ratios pushed university managers to funnel more capital into financial markets and to take on higher levels of construction debt.

Similarly, Prager and his associates’ work developing new prison financing mechanisms enabled the California Department of Corrections to acquire over 2.5 billion dollars in state-backed lease revenue bonds over the 1980s, supplementing 2.5 billion in general obligation bonds, which the Department of Corrections used to expand prison capacity by approximately four hundred percent (101). This prison expansion was accompanied by the rewriting of criminal law and by the emergence of new forms of urban policing, surveillance, and spatial enclosure, outlined by Mike Davis in City of Quartz.

The assertiveness with which financial advisory firms in the 1980s worked to turn the prison and higher education industries into new sites of real estate investment and capital accumulation is especially striking when considered in relation to KPMG’s most recent, and much more reticent, 2010 edition of “Strategic Financial Analysis for Higher Education,” the successor to their “Ratio Analysis in Higher Education.” In this most recent edition, Prager and his associates implicitly acknowledge that their earlier ratios had not been conservative enough to protect against financial meltdowns, and even that university managers probably shouldn’t have been relying on abstract ratios in making investment decisions in the first place. “Financial analysis is not a static exercise,” they write; “'Acceptable metrics' in one environment may not be desirable in another.” In their contextualist 2010 edition, the only advice the KPMG authors confidently assert is that central administrators must systematically incorporate a “risk management” framework into all dimensions of university governance, lest they be caught off guard again by financial or other shocks.

The University of California certainly has followed this prescription. The university’s Office of the President recently established an “Office of Risk Services,” and has begun convening regular “Risk Summits” and meetings of the “Risk Management Leadership Council.” This turn toward risk management can be read as marking the incorporation of security and surveillance techniques into the heart of public university management, including the management of university finances.

The variant of “risk management,” that has recently been taken up by University of California administrators is a composite thing, drawn together from disparate sources and remolded to fit local conditions. In part, risk management follows from the codification of internal accounting techniques that were developed in the aftermath of the Watergate scandal, but only formally required of public companies following the 2002 ENRON scandal. As KPMG and other boosters insist though, risk management is not simply a matter of insurance or internal compliance mechanisms. It also entails new, more ambitious, modes of governance and control, first developed for the logistics and security industries. The logistics industry, contending since the 70s with elongated supply chains and just-in-time production, developed tracking and distribution practices to limit both the frequency and disruptive effects of delays across supply chains. As Deborah Cowen has shown, these new practices drew the logistics industry closer to security and military agencies. The notion of “supply chain security” indicates how logistics has come to rest upon a strategic relation to space; nodes and spans in supply chains, including ports, highway networks, ocean passages, and rail yards must be surveilled and enclosed by force in order to ensure the smooth flow of commodities. Thus, under the banner of supply chain security, the urban policing, surveillance, military, and logistics industries have become increasingly enmeshed since 2001.

Documents designed to introduce interested UC administrators to “Enterprise Risk Management” contain illustrations and categories drawn directly from the logistics industry, including just-in-time production and supply chain analysis. But these and other categories of risk management require a certain amount of translation to fit within university contexts.

For the remainder of my talk, I want to discuss a few recent events that illustrate the contested local manifestations of risk management practices at UC Berkeley.

First, concerning new construction. As a result of anti-tuition and occupy mobilizations in 2011 and ’12, the University of California adopted a multi-year tuition freeze in the summer of 2012. At this same moment, a spokesperson for UC Berkeley’s office of Capital Projects announced that future dorm construction would be outsourced to private developers in the form of ground lease agreements. Since then, other development projects are being privatized through similar agreements, both at Berkeley and on other California campuses. Not coincidentally, a 2012 Bain report on “The Sustainable University” encourages university managers to use ground lease agreements to reduce debt leverage and to avoid risk exposure attendant upon new development.

This turn toward privatized construction – aligned with the project of risk management – has contributed to an intensified securitization of university space. Partially or fully privatized new buildings, such as the Li Ka Shing Center for Biomedical and Health Sciences, the Blum Center for Developing Economies, and the Energy Biosciences Institute, are each at least partially closed to the general public and require key card or other forms of securitized access. In February 2013, organizers with the Student of Color Solidarity Coalition took over the Blum Center to protest the appointment of Janet Napolitano as UC President -- a particularly glaring illustration of the university’s securitizing turn. The occupation of the Blum Center challenged as well the shift toward spatial enclosure at UC Berkeley and its racially exclusionary effects.

The enclosure of campus space also appears in university administrator and police anxieties toward the presence of “non-affiliates” on campus. As Brian Whitener and Dan Nemser note, UC risk management templates identify the presence of non-affiliates (i.e., people perceived as having no direct tie to the university) as a factor that increases the risk profile of a given event. The non-affiliate is a racialized figure, which was made glaringly evident when UC Davis administrators, in justifying police violence against Occupy Davis protesters, attempted to associate the threat of sexual violence at occupy encampments with the presence of Oakland-based demonstrators on campus. The everyday campus police harassment of black students and workers on and near campus is linked to this anxiety over the presence of non-affiliates, and manifests a broader anti-black exclusionary logic, which can be traced back as well through recent privatizing reforms, the passage of Proposition 209 in 1996, and the anti-affirmative action politics of the 1980s.

Following acts of police violence against Occupy Davis, Berkeley, and Riverside protesters in 2011, then-President Yudof commissioned an internal review of campus police practices. Recommendations that emerged from this review align with the principles of risk management. Police responses to protests are to be managed by administration-led crisis response teams, and police are responsible for recording all demonstrations.

Before concluding, I want to turn briefly to recent actions in Berkeley and Oakland against anti-black police violence, considering them in relation to the rise of risk management and the intensification of securitization at and beyond the university. In the midst of larger uprisings in the bay area and nationally following the non-indictments of Darren Wilson and Daniel Pantaleo, UC students were particularly galvanized when Berkeley police decided to use tear gas and batons to drive hundreds of students and other local residents ten blocks south of campus. Presumably, the police decided to force students away from campus because the demonstration’s original proximity to dorms and a commercial district meant that police could not secure the area and that the risk of costly property destruction was relatively high.

While many students likened this act of police violence to the violence inflicted on students by police in 2011, the demonstrations that emerged in response were quite different. In 2011, students responded by holding strikes on campus, while this past December, students and other local residents gathered each night on the edge of campus, and marched along different routes through Berkeley and Oakland, stopping at police stations, shutting down highways and train lines, and destroying windows of banks, police cars, and chain stores. More recently, Black Student Union members have marched through commercial districts of Berkeley, interrupting restaurant and commercial businesses by reading the names of black people killed by police or vigilante violence.

In traveling through Berkeley and Oakland, student protesters have refused to remain enclosed within the bounds of campus, or even in some cases to take political action as students. In doing so, they have worked to de-activate the student / non-affiliate binary. They have also acted in a way that implicitly recognizes the increasing imbrication of university policing, urban policing, and supply chain security, as well as the similarly anti-black nature of these varied forms of policing.

In my introduction I referred to the “tilting” of the state toward incarceration and away from education, beginning in the eighties. As we’ve seen, this tilting is not simply a matter of a tipping of the scales of state funding toward the CDC and away from the UC. It also refers to a tilting forward – a shift toward a more martial posture – that has affected all state institutions, including the universities. Those assuming this posture don’t incline toward negotiation. It is this aggressive posture that we confront when we fight fee hikes; reclaim campus spaces; strike for better working conditions; or march to local nodes of global supply chains – ports, rail yards, commercial centers, and freeways – to challenge racist state violence.
Posted by a at 10:11 AM No comments: