... in anticipation of wednesday's regents meeting, and of other times. 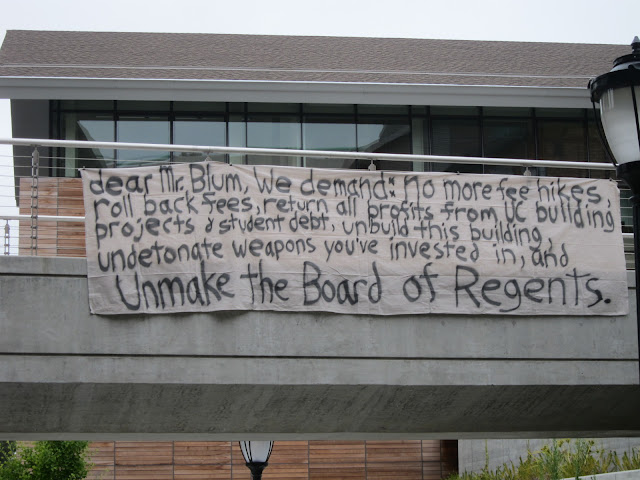 Privatization is a Killer: Zombie Takeover at the UC Regents’ Meeting

Come out with us to protest the Regents’ most recent plans to consider a 20.3% fee hike for the Fall if Gov. Jerry Brown’s tax initiative (Prop 30) is not approved by voters. Let them know enough is enough! We refuse to have the budget balanced on the backs of students and workers, who are already overburdened with debt and facing devastated job markets. Get on your zombie gear (or come as you are!) to collectively tell the Regents: NO FEE HIKES! EDUCATION CAN AND SHOULD BE FREE. More fee hikes are a debt sentence.

-We will be leaving from the Downtown Berkeley Bart station at 7:00am

…because WE are the public and won’t let private interests sell out our futures.


Though Jasper was on track to have a probable cause hearing for the May 1 arrest on June 29, one of the officers subpoenaed was on vacation. As a result, the hearing was rescheduled for July 20. He has an intervening court date on July 11, but does not need supporters to show up then. The hearing on the 11th is a routine appearance, designed to give his lawyer a chance to speak with the judge and the DA.

Essentially, Jasper is hoping to resolve the case through an agreement with the DA. Because the case has dragged on so long, and because he has taken a postdoc at Duke University and is scheduled to begin teaching there in August, he is willing to accept a reasonable plea deal. Though all of the charges are spurious, he wants to get this over with and go on with his life, and has indicated to the DA that he is willing to plead guilty to one charge from May 1, as long as the terms offered are not too onerous and will allow him to move to North Carolina with his family in August. So far, the DA has been unwilling to make a reasonable offer, and is insisting on certain terms – such as a stay-away order from UC property – that are unacceptable. Given the fact that Chancellor Birgeneau has already told the DA to withdraw charges for November 9 (thanks to phone calls and pressure from supporters) it is more than ridiculous for the DA to continue to pursue these kinds of punishments.

At this point, the best way to support Jasper is to continue to call the DA and to tell them to drop the charges for Nov. 9 and make a reasonable offer. It’s best to contact the Deputy District Attnorney handling the case directly, Chris Cavagnero, as well as his supervisor, Paul Hora. Call (510) 272-6222 and ask to be put through to them. It would be best if calls happened this Monday and Tuesday (July 9 and July 10), before his appearance on July 11.
Posted by a at 12:28 PM No comments: