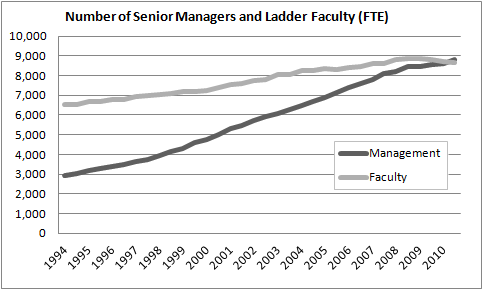 It's official -- the administration continues to grow as faculty and workers continue to shrink. In this context, it's worth noting once again that administrators are the only ones getting substantial raises these days (the Daily Cal has the enemies list). We have to remember that austerity doesn't only mean cutbacks and layoffs -- it also corresponds to hirings and bonuses.


In November of 2009, KeepCaliforniasPromise.org posted a report by Richard Evans titled “Soon every faculty member will have a personal senior manager” which pointed out that the number of managers at UC was growing far faster than the ranks of the faculty and that, if the trend continued, it would not be long before there were more senior managers than ladder rank faculty. Richard just sent me an e-mail pointing out that data through April of 2011 was out.

I wondered if the data would show how the “Working Smarter Initiative” and much talked about cuts of $80 million to the UC Office of the President, had combined with promises to first and foremost “preserve excellence in instruction, research and public service… which it cannot do without continuing to attract and retain top-flight faculty” (see, http://www.universityofcalifornia.edu/news/article/25580) to reverse that trend.

Well, it turns out faculty ranks have declined by 2.3 percent since the 2009 post, at a time when student enrollment increased by 3.6 percent. (I would hope the UC administration wouldn’t try to spin a continuing erosion of a major measure of academic quality such as the student faculty ratio as increased efficiency.)