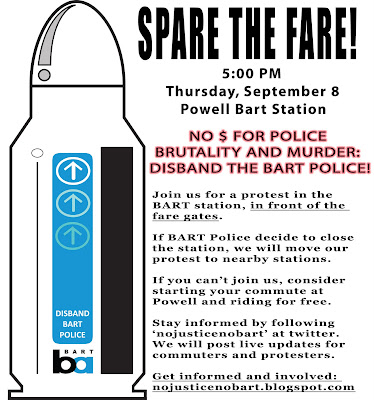 "There are difficult lessons to be learned from last Monday's operation. OpBART 3 was planned specifically to avoid offending the delicate citizenry of San Francisco, and to remain within the boundaries of what protesters themselves seemed comfortable with. Internal criticism and loss of support around previous events had focused on the perceived “violent” conduct of protesters, in accordance with the shared belief of how nonviolent protest “works”: that said protests are supposed to be “polite”, and avoid “causing trouble”. This ignores the historical context and conduct of other nonviolent movements, whose myths we are taught in primary school--those of MLK and Gandhi see particular focus, using arguments so ahistorical as to make their actual tactics and accomplishments almost entirely meaningless.

“Gray hoodie", a man who stood up at the end of the second event in a plea to get protesters to DO SOMETHING, was widely vilified by fellow protesters for his "violence": this is indicative of willful misinterpretation on the part of the public and of the movement. His repeated insistence that "it's not a protest unless you're causing a disruption; people won't care unless you're causing a disruption" was ignored or shouted down by all but a few, and he was paraded around social networks as "the violent guy" or "the agent provocateur" despite his only action being to peaceably stand in the street. The fact is--and ideally, last Monday's low-energy, low-impact turnout should have illustrated this clearly to those who had doubts--he was entirely correct. Now unburdened and free to go about their day normally, the people and media--with the exception of poorly-written op-eds with a bone to pick--of San Francisco have almost entirely failed to take notice of Monday’s event. Unless people are forced to listen, forced to care, they will continue to be as complacent as they are allowed.

The citizens of San Francisco, far from the paragons of leftist thought they are imagined to be, are both reactionary and authoritarian. They will support societal change if it means dropping coins in a box or buying a coffee in a biodegradable cup, but when civil action (even against a massive, easy-to-understand injustice such as police brutality) threatens to inconvenience them personally, they will lose any pretense of social consciousness. Any minor delay or inconvenience, like having to walk two extra blocks to the next open station, is treated as a barbaric and unjustifiable personal assault--completely ignoring any larger meaning.

The philosopher Slavoj Žižek, in his essay (available in lecture form on YouTube) "First as Tragedy, Then as Farce", illustrates this perfectly: having been presented with so many "tame" ways to assuage both their guilty consciences and partially-formed senses of social justice, people--particularly self-identified liberals--find themselves increasingly able to eschew criticism of a widely abusive system in favor of personal convenience. "I don't need to protest or care about this," the people say. "I buy Free Trade coffee."

Let it be made abundantly clear: The people of San Francisco are more concerned with selfish personal convenience than they are about social injustice. Until the day that they are personally beaten by the police, they are morally and ideologically comfortable with the dismissal and marginalization of a social movement against police murder in favor of not having their commute disrupted. They must be MADE to care, and dragged into consciousness kicking and screaming.

The police are another matter entirely. Now completely secure in their belief that there is a line (both physical and ideological) that the protesters will never comfortably cross, they realize that there is no real threat to the status quo. Remember: police brutality is the status quo. Police brutality is normal, accepted, even defended by American citizens--you can read hundreds of San Francisco residents defending the actions of the police who murdered Charles Hill and Oscar Grant in every single article about the protests. Challenging police brutality means challenging the system itself, everyone who supports it, and the social structures that keep it in place.

Responding with massive force, and confident that no one will truly challenge them past ineffectual sign-waving, the police know it is merely a matter of time before they grind down the spirit of the protest and return to a state of unquestioned hegemony. Backed by a public inclined to automatically believe anything they say (this being America, "if you are killed by the police you must have deserved it" is the majority sentiment), they see that this movement, as it stands, presents no real challenge to their power."

For an open letter from the physician who treated Charles Hill:
Charles Hill Was My Patient – I Am Joining the BART Protest in his Honor

I am one of your local physicians and have taken care of many different kinds of people during the past nine years of my appointment as an internist at UCSF, where I have worked at SF General Hospital as well as at the VA and the UCSF campuses.

San Francisco is a surprisingly small town, and when you spend enough time in the health care industry, you come to recognize many of the city's residents. You hold their stories and watch over them, in the hospital when they are ill and in the chance occurrences of running into them on the streets, in the market or painting the town red.

It is an honor and great privilege to take care of the people of this city that I love so dearly.

Last month, I learned that one of my former patients, Charles Hill, was shot and killed by BART police. Per the police, he was armed with a bottle and a knife and had menacing behavior. Per eye-witnesses, he was altered and appeared to be intoxicated but did not represent a lethal danger.

I remember Charles vividly, having taken care of him several times in the revolving door that is the health care system for the people who do not fit neatly into society. Charles was a member of the invisible class of people in SF --mentally ill, homeless and not reliably connected to the help he needed.

While I had seen him agitated before and while I can't speak to all of his behavior, I never would have described him as threatening in such a way as to warrant the use of deadly force. We often have to deal with agitated and sometimes even violent patients in the hospital. Through teamwork, tools and training, we have not had to fatally wound our patients in order to subdue them.

I understand the police are there to protect us and react to the situation around them, but I wonder why the officer who shot Charles did not aim for the leg if he felt the need to use a gun, instead of his vital organs. I wonder if he possessed other training methods to subdue an agitated man with a knife or bottle.

I feel this situation quite deeply. It is hard to watch our civil servants (police) brutally handle a person and their body when I spend my time and energy as a civil servant (physician) honoring the dignity of that person, regardless of their race or social class, their beliefs or their affiliations. I know it is not my job -- nor the police's job -- to mete out justice or judgment of a person's worthiness. It is also hard because Charles has no voice, no one to speak for him now that he is gone. It would be easy to let this slide and move on with our busy lives, as we all struggle to make ends meet in this expensive city during a recession. I believe this situation shows us how powerless we all feel to some degree.

I feel outraged and am trying to find the best ways to express it -- through creative outpouring, through conversations. I would like to lend my voice to the growing protest of the BART police's excessive use of violent force and know that weekly protests are being organized on Mondays until demands are met for BART to fully investigate the shooting of Charles Hill, disarm its police force and train them properly, as well as bringing the officer who shot him to justice.

The media is portraying the annoyance of the protests to commuters more than the unbelievable horror that an innocent man was shot dead by the force that is meant to protect us. I don't want to upset commuters or be a nuisance. I would like to be part of educating and not letting this slip under the proverbial rug -- in honor of Charles Hill and in order to help prevent something like this from ever happening again.

I will be present at the peaceful demonstrations on Mondays in front of the BART Civic Center station, not to prevent commuters from getting home, but to educate a population that may need to pause and think about the value a human life has and the kind of San Francisco we want to live and work in.

Thank you for your time and thoughtful consideration.

New comments are not allowed.