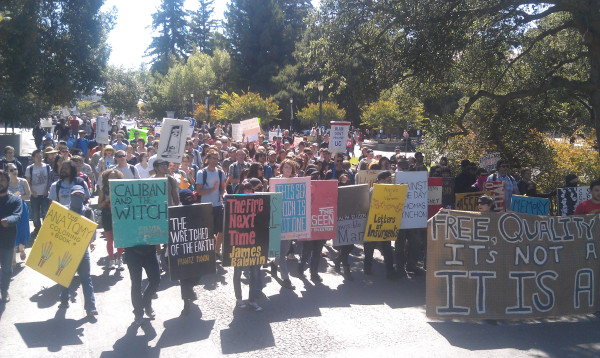 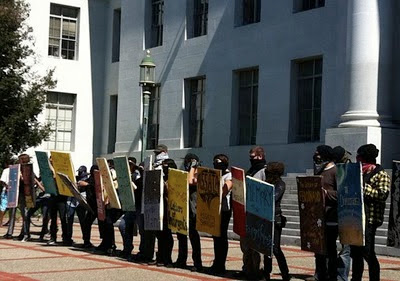 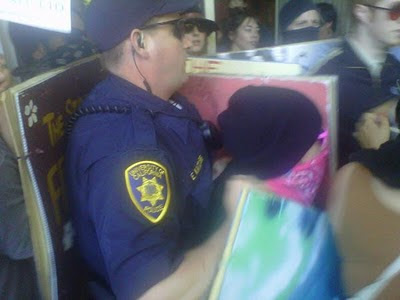 After a rally that drew more than 400, a 20 title strong book bloc led the crowd on a rowdy march through the campus towards Tollman Hall. Upon reaching the building, the book bloc fought off police as the crowd rushed in to occupy the building. Over the next hours, students and friends occupied multiple rooms of the building while police watched nervously. Meetings were held, students held a skype meeting with their counterparts in Chile, donated food was delivered and those present discussed how to push the struggle forward over the next months. At 9pm, riot police flooded the building and clashes broke out as those inside forced their way through police lines and rocks and bottles rained down on the officers. By the end of the day, the police had made two arrests and one book The Sex That is Not One by Luce Irigaray was confiscated by police.

This was the first day of what promises to be a hot fall on campuses across the state.


Unfortunately, the open occupation was ended rather violently by the UCPD. While students and community members had gone into Tolman to create an open, collective alternative space for organizing, studying and solidarity, the UCPD had no intention of allowing students to live in peace. UCPD tackled a demonstrator some time around 8PM arresting him for likely bogus charges. Later, while students chanted in the lobby of Tolman, UCPD tried to block the doors to force students in. When students tried to open the doors, UCPD pushed, punched, and batoned students. One demonstrator trying to exit was tackled, beaten, and had his legs twisted for absolutely no reason. His screams were audible even after UCPD carried him to the second floor of Tolman.