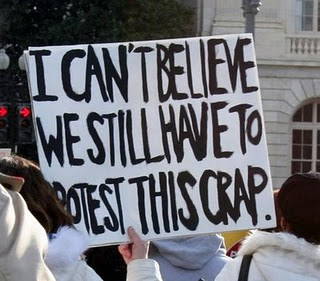 A handy guide for California protestors from the ACLU here.

And from the San Francisco National Lawyers Guild, printable "Know Your Rights" wallet cards in Spanish and English here.

"We produced this guide for people like you: people who are not afraid to stand up for what they believe and those who may never have thought of themselves as protesters but who are forced into action to protect a precious freedom or right. Native Californian or newly arrived immigrant, student or worker, environmentalist or pro-choice activist—if you want to speak out, this guide is for you.

You are part of a vigorous tradition of protest that dates back decades in our state: from the workers who went on strike against exploitative labor conditions on the docks in San Pedro in 1923 and were arrested by the hundreds; to the repressive Red Scare years, when demonstrators were hosed down by police outside House Un-American Activities Committee hearings in San Francisco City Hall; to the civil rights protesters of the 1960s, who helped end segregation in housing developments and businesses throughout California."
Posted by TR at 10:16 AM