The Budget Cuts and the Privatization of the University of California 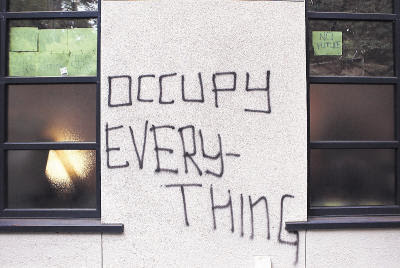 A version of this article was recently published in the UCSC Disorientation Guide. We repost it here because we found it to be a very useful resource: a history of the UC from the perspective of austerity that collects and synthesizes a lot of otherwise dispersed data. Give it a read, and check out the rest of the disorientation guide as well.

As you go from class to overcrowded class this fall, you’ll want to forget that tuition last year was around $1,800 less than you’re paying now. Continuing a 30-year trend, the UC Board of Regents gathered in cigar and gin-soaked boardrooms over the summer to raise our tuition by 17.6% and lay down plans for further increases in January, or maybe just raise tuition 81% over the next 4 years. (Hey, overcrowding at least improves your chances of getting lucky; tuition hikes on the other hand, just increase the probability of working a shitty job in college and plenty of debt after). The UC Office of the President (UCOP) never tires of reminding us that tuition increases are the recession’s fault or scolding us that Californians are just unwilling to spend on education in hard times; this is a strange excuse though, since state funding has been decreasing while tuition has been skyrocketing since the early 1990s. Even while UCOP continues to whine about how poor it is and how unfortunate it is that they need to raise tuition, it’s offering the state of California a billion dollar loan from UC financial reserves. As it happens, in 9 of the past 10 years tuition was raised – well before the 2008 recession began; UCOP’s insistence on the necessity of this recent series of tuition increases has so many logical fallacies that if it were an assignment, it’d get an F (assuming, of course, that the overburdened TA grading it even had time to pay attention to it). Tuition hikes and budget cuts – at all levels of California higher education – are part of the decades-long process whereby the richest assholes in California (and the greater US) intend to make private what few institutions remain in public hands.