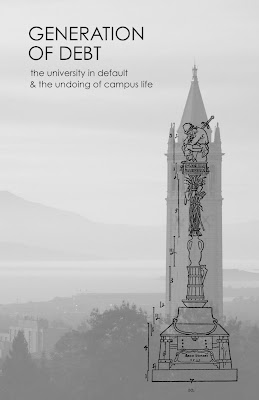 The Reclamations Journal folks have just released an educational and agitational pamphlet on student debt. Below are some passages from the text, but it's really worth reading the whole thing -- I don't think I've read another single compilation or text that so effectively outlines the devastating current realities of student debt, how these realities are centrally related to broader economic conditions and crises, and what can be done to resist student debt and its effects...


Generally speaking, debt is a collective phenomenon suffered individually. Our monthly loan statements are like nineteenth century serialized novels—mass reading material, anticipated by all but read alone. When experienced in this way, by dispersed individuals, debt appears to be merely a fact of life; a kind of required reading material. It can be nearly impossible then to imagine how our personalized loan statements or individual defaults could be fought in a way that forges bonds between us. How loans could produce more than isolating shame, anxiety, and loss. Or how, in a word, we could collectivize struggles against indebtedness and unemployment, and in doing so open the horizon of our futures.

Today, student debt is an exceptionally punishing kind to have. Not only is it inescapable through bankruptcy, but student loans have no expiration date and collectors can garnish wages, social security payments, and even unemployment benefits. When a borrower defaults and the guaranty agency collects from the federal government, the agency gets a cut of whatever it’s able to recover from then on (even though they have already been compensated for the losses), giving agencies a financial incentive to dog former students to the grave.

When the housing bubble collapsed, the results (relatively good for most investors, bad for the government, worse for homeowners) were predictable but not foreordained. With the student-loan bubble, the resolution is much the same, and it’s decided in advance.

Federal student loans originate in the National Defense Education Act of 1958. These loans were, on the advice of noted neoliberal architect Milton Friedman, direct federal loans to students that by-passed institutional control: through this, Friedman intended to direct more federal dollars to private institutions as a means to discipline and eventually privatize public education (Federal Education Budget Project). While a necessary first step, the design flaw in this program was that any direct federal loan showed up as a loss on government balance sheets even though the loan would no doubt be repaid in the future – with interest. To get around this, the government instead began guaranteeing loans to students by private financial houses: in essence privatizing an enormous chunk of federal largesse.3 With the dramatic decrease in federal funding to institutions themselves in favor of loans and grants – as mandated by HEA - the stage was set for institutional competition and the explosive growth of college tuition as the market would now determine education’s worth.

Building a student loan debt abolition movement also requires that we reframe the question of the debt itself. A first step must be a political house cleaning to dispel the smell of sanctity and rationality surrounding debt repayment regardless of the conditions in which it has been contracted and the ability of the debtor to do so. Most important, however, from the viewpoint of building a movement is to redefine student loans and debts as involving wage and work issues that go to the heart of the power relation between workers and capital. Student debt does not arise from the sphere
of consumption (it is not like a credit card loan or even a mortgage). To treat student loans as consumer loans (i.e., deferred payment in exchange for immediate consumption of a desired commodity) is to misrepresent their content, making invisible their class dimension and the potential allies in the struggle against them.

Student debt is a work issue in at least three ways:

i. Schoolwork is work; it is the source of an enormous amount of new knowledge, wealth and social creativity presumably benefiting “society” but in reality providing a source of capital accumulation. Thus, paying for education is, for students, paying twice, with their work and with the money they provide.

ii. A certificate, diploma, or degree of some sort is now being posed as indispensable condition for obtaining employment. Thus the decision to take on a debt cannot be treated as an individual choice similar to the choosing to buy a particular brand of soap. Paying for one’s education then is a toll imposed on workers in exchange for the
possibility, not even the certainty, of employment. In this sense, it is a collective wage-cut.

iii. Student debt is a work-discipline issue because it represents a way of mortgaging many workers’ future, of deciding which jobs and wages they will seek and their ability to resist exploitation and/or to fight for better conditions (Williams).

-- George Caffentzis, The Student Loan Debt Abolition Movement in the US

Generation of Debt Final
Posted by a at 11:51 PM