Some Links from Yesterday's BART Protest 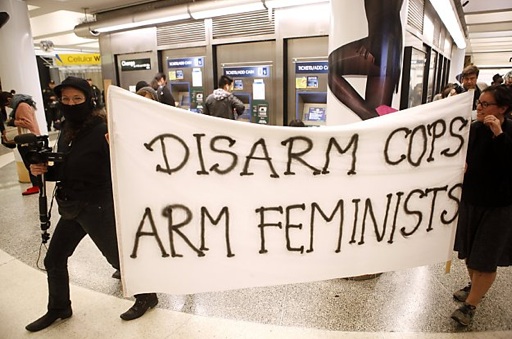 The SF Appeal has a pretty decent roundup of mainstream media links, but an even better one by SFSU journalism student Katherine Grant is here. By far the best report is at the SF Bay Guardian (the worst, as usual, is the drivel from the Chronicle):


Before the banners and bullhorns came out, BART spokesperson Jim Allison told the Guardian that if BART police deemed a gathering inside the unpaid area of the station to be dangerous, "we would ask people to disperse." If they didn't disperse, "we would declare an unlawful assembly." Allison said protesters were free to exercise their first amendment rights to protest inside the areas of the station that don't require a ticket to enter. He said people could do that as long as they were not "interrupting or interfering" with regular service. When the Guardian caught up with Allison after the protest by phone to find out why his statements about the dispersal order were contradicted by police activity, he refused to answer our questions, directing us instead to watch a press conference on the BART website.

"I'm going off duty," he said after calling the Guardian in response to a page, after being asked several times why BART police had not issued a dispersal order before surrounding people and arresting them. "I simply cannot devote the rest of my night to answering your questions."

Before police closed in, the protest featured some 60 protesters chanting things like, "How can they protect and serve us? The BART police just make me nervous." One banner, from a group called Feminists Against Cops, read, "Disarm BART, Arm Feminists."

Things heated up when the protest got closer to the fare gates, at which point police may have determined that protesters were interfering with service. At one point, police tackled a masked demonstrator to the ground. However, when people were detained, they were not standing directly in front of the fare gates.

Police did not make any public statements indicating that the situation had been deemed unlawful before surrounding the group of detainees, nor did they issue a dispersal order. We were told that we were not free to leave.

While I was detained along with Luke Thomas, a reporter from the popular political Fog City Journal, and freelance reporter Josh Wolf, an officer told us that we were being detained on suspected violation of California Penal Code 369-i, which prohibits interfering with the operations of a railroad.

Thomas phoned Matt Gonzalez, former president of the Board of Supervisors and now a chief attorney with the Public Defender's office, to ask about that law. Gonzalez looked it up and told him that there was an exception to that law which "does not prohibit picketing in the adjacent area of any property" belonging to a railroad. So it would seem that the protesters, along with more than a dozen journalists, were being unlawfully detained. When we put this question to one of the officers who stood holding a nightstick and blocking us in, he refused to address the issue directly, repeating that we weren't free to leave.

Members of the press with San Francisco Police Department issued credentials were made to line up and present their press passes to San Francisco police officers, who had been called in to assist. The police officers took away media's press passes, saying it was SFPD property and could be retrieved later -- which meant that if journalists had opted to stay and cover any further police activity, we would have had no way of presenting credentials to avoid arrest. We were issued Certificates of Release and ushered outside of the station, where it was impossible to see what was happening, and therefore, impossible to do our jobs as reporters.

Meanwhile, over at the Glen Park BART station:

The vandals also scrawled the name of Charles Hill at the station. Hill was a transient who was fatally shot by BART police after he allegedly lunged at them with a knife on July 3.

Salaver says BART police are investigating whether the vandalism is tied to a protest earlier Thursday at the Powell Street station — the latest in a series of protests that began after Hill's death.

Here's a statement posted by "Some Bay Area Anarchists" at Indybay:

On the evening of September 8th, 2011 we sabotaged the fare machines, turnstyles and facade of the Glen Park BART station in South San Francisco. Just as we have been inspired by comparable actions of anarchists world wide, we hope to act as a catalyst to incite similar actions against the state and it's apparatuses of control.

Our spray cans dispensed slogans and our hammers shattered screens and ticket readers. We look to each other to find meaning and reject the limiting discourse of rights and free speech as a vehicle for our rage. We communicate this now to denounce the authority of a society that violently represses us every time we step out of line.

All police are the enemy. We articulate this when we choose to honor the lives of Oscar Grant, Charles Hill and Kenneth Harding by fighting for our own lives. This same passion for freedom can be observed from Seattle to Greece to Chile. As anarchists we understand that the social control of transit fares exists in harmony with the deadly enforcement of the physical, emotional, and social desolation of our everyday lives. We aim to interrupt this concert at every feasible opportunity.

The police and the media will spin this event as petty vandalism. Some will condemn us and suggest that violence against property promotes state repression, but we have lost our fear. We do not seek approval from any authority and for this reason we abandon the tired structure of demand.We look to explore our capacity to exemplify our collective abilities and to encourage others to resist in ever more autonomous and uncontrollable ways. Freedom to those arrested at today's Powell Street action. See you at the barricades.

PS: mad props to the wildcat longshoremen of washington. keep it wild