Donald Sterling, "Elegant Racism," and the Restructuring of the Public University 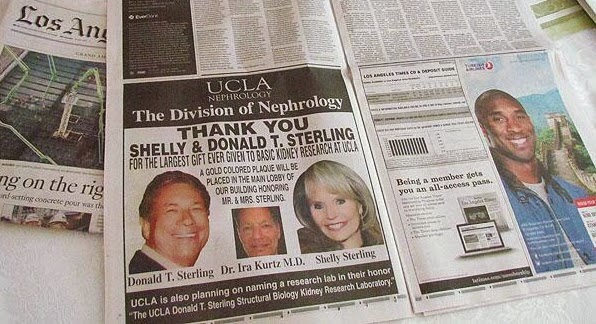 You may have seen this advertisement, which ran in the LA Times on Sunday, April 27, two days after the original story broke. The ad was most striking not because of its design (awful) or timing (even worse) but because of what it tells us about the current state of the University of California. Not only, it proclaimed, was $3 million of Donald Sterling’s money being funneled into the UCLA School of Medicine but the school was planning to name a lab after him: “The UCLA Donald T. Sterling Structural Biology Kidney Research Laboratory.”

UCLA scrambled its PR teams to declare that the donation had been refused:


Mr. Sterling’s divisive and hurtful comments demonstrate that he does not share UCLA’s core values as a public university that fosters diversity, inclusion and respect. For those reasons, UCLA has decided to return Mr. Sterling’s initial payment of $425,000 and reject the remainder of a $3-million pledge he recently made to support basic kidney research by the UCLA Division of Nephrology.

The university’s spokesperson made clear that it was Sterling who had taken out the advertisement, and claimed that there had never been an agreement to name the lab after Sterling. Still, the UC’s vigilant protection of its brand (“Pioneering. Curious. Vibrant. Thoughtful. Even beautiful.”) suggests that at the very least the use of the university’s name had been approved.

But UCLA’s press release does more than what it appears to do on the surface—while attempting to perform a rejection of racism, it implicitly reveals how racism continues to shape the public university in an age of austerity and economic restructuring. It constitutes not only a statement about the university's response to the Sterling scandal but also a definition of racism: “divisive and hurtful comments.” That’s it. It’s KKK racism—old school racism, Jim Crow racism, explicit racism, over the top racism, easy to see racism. Ta-Nehisi Coates calls it “oafish racism,” which he contrasts with “elegant racism”:


Like Cliven Bundy, Donald Sterling confirms our comfortable view of racists. Donald Sterling is a "bad person." He's mean to women. He carouses with prostitutes. He uses the word "nigger." He fits our idea of what an actual racist must look like: snarling, villainous, immoral, ignorant, gauche. The actual racism that Sterling long practiced, that this society has long practiced (and is still practicing) must attract significantly less note. That is because to see racism in all its elegance is to implicate not just its active practitioners, but to implicate ourselves.

The point is not so much to contrast “words” with “actions.” After all, speech is an action, and one that can have material consequences. Remember Christian Head? Last July, Dr. Head, a surgeon at UCLA’s medical school, was awarded $4.5 million in a racial discrimination suit that he’d brought against the UC Regents:


The agreement settles the lawsuit, filed in April, that accused the university of failing to prevent discrimination, harassment and retaliation against Head. The head and neck surgeon alleged that he was retaliated against for filing complaints through normal channels and was denied teaching opportunities.

Head, 51, also alleged that he was routinely publicly humiliated and once was depicted as a gorilla being sodomized in a slide show presentation during a resident graduation event.

So the point is not to dismiss words, but to consider just how easily racist structures can coexist with the language of liberal diversity, inclusivity, and multiculturalism. Back in 2009, Sterling agreed to pay $2.75 million to settle a housing discrimination case brought by the Justice Department which claimed that he discriminated against Black and Latin@ tenants in his Los Angeles apartment buildings. It was the largest monetary settlement on a housing discrimination case ever. But racist business practices are one thing, “divisive” comments another. If only Sterling had kept his mouth shut!

All of these things have already been said. But there’s another question that hasn’t quite been addressed—what does this tell us about UCLA, the UC, and more generally the public university? One thing it might tell us is that the university is not only implicated in but also profits directly off of dirty money. And it's not just Sterling. In 2011, to take one egregious example, Bank of America paid a $335 million settlement concerning the bank’s predatory lending practices against Black and Latin@ borrowers. From 2004-2008, the bank had intentionally charged Blacks and Latin@s higher rates on their mortgages than they did for similarly qualified white borrowers. Much like Sterling’s housing discrimination settlement, this was the largest fair lending settlement in history. And yet, when you go to the quad at UCSF-Mission Bay—yes, right there, just north of Genentech Hall—this is what you find:

Why do some expressions of racism appear as shocking and outrageous, while others tend to fade into the background? For the privatizing public university, always seeking to maximize its revenue streams, materially racist practices that shape the lives of real people are not only an insufficient reason to turn down a donation—they do not even appear as a problem. And this is just a single, particularly obvious example. The UC increasingly runs on this kind of money—all universities with endowments do. They profit off dirty money, from fossil fuel extraction and the military occupation of Palestine, as divestment advocates have been pointing out for years, to land grabs in Africa, biotechnology (that's you, Genentech), and racist banks and slumlords. As the UC becomes increasingly dependent on these revenue streams, it will necessarily become more and more reluctant to refuse such donations. This is not because UC administrators are "oafish racists" but because racism is part and parcel of how business is done under capitalist white supremacy. An “elegant racism” increasingly flows through the UC’s books and registers in the changing composition of the student body and the capital projects and research centers that increasingly occupy these campuses. The university is not only complicit with but actively participates in and profits from this racism, and will continue to do so until the structural racism of "business as usual" is made as visible and tangible to the administration as the comments of scumbags like Sterling.
Posted by d at 8:06 AM 1 comment: