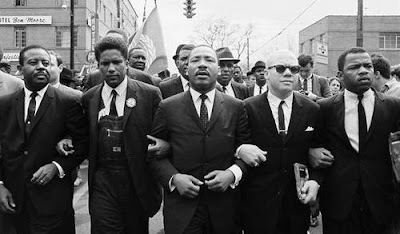 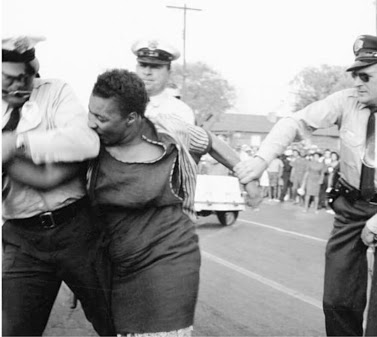 "UCB Chancellor Robert Birgeneau’s statement rationalizing police beatings of unarmed and unthreatening protesters relies on a contentious contrast between those who “chose to be arrested peacefully” and are to be “honor[ed]” because they “were acting in the tradition of peaceful civil disobedience,” and others who “chose to obstruct the police by linking arms and forming a human chain to prevent the police from gaining access to the tents” of their would-be encampment. The latter tactic, he writes, is “not non-violent civil disobedience.” Overnight the discussion of Birgeneau’s letter has focused on its willingness to defend beating in the name of non-violence and its fetishization of non-violence as such. In agreement with those points, I'm also interested in Birgeneau's falsification of the history he references and, positively, in the tensions it suggests when we don’t accept such a cheap edition of it.

Closer to home, Mario Savio was among a group of protesters who repeatedly picketed and sat in at the Sheraton Palace Hotel in San Francisco to protest its racially discriminatory hiring policies in 1964. They did so in violation of a court injunction that limited the time they could protest, and on March 7, 1964, were arrested “lying down with arms linked . . . blocking the exits of the hotel” (from Savio’s applications to the Mississippi Summer Project, King Center Library, Atlanta; quoted in Jo Freeman, “How the 1963-64 Bay Area Civil Rights Demonstrations Paved the Way to Campus Protest,” Organization of American Historians, San Francisco, April 19, 1997). Freeman, who participated in the Sheraton Palace protests, remembers how their efforts were almost universally reviled.

In thinking about the reception of African-American civil rights protest and examples like Mario Savio’s together, we re-encounter in its most powerful form Birgeneau’s hoped-for distinction between heroic non-violent activists and undesirable, not non-violent students. It's the convenience of this that is at stake in the question of the incidence of resisting arrest in “classic” African-American civil rights protest. In a recent book on the photography of the civil rights era, Martin Berger and David Garrow ponder the anonymous photograph above, showing a woman in the Birmingham protest fiercely contesting her arrest. Berger and Garrow point out that the mainstream history of the era tends not to reproduce such photographs, and we can see the legacy of that decision in the cliche version of the “tradition” mobilized by Birgeneau. “White publications in the North shunned such complicating photographs,” they note, leaving it to segregationist journals to publish them. The “inactive-active opposition,” they argue, “structured the emotional and intellectual response of whites to photographs of dogs and fire hoses” ( Seeing Through Race: A Reinterpretation of Civil Rights Photography [Berkeley and Los Angeles: University of California Press, 2011, p. 119]) and so regulated both their empathy and their understanding of protest. It is this very opposition that Birgeneau complacently repeats, at once narrowing the possibilities for activism and obscuring the complexity of the legacy he thinks he honors."