7:36(am): Just woke up after a long, tense night at the encampment. The cops were staging all around us, from midnight until 6am. Following reports of a likely raid, we actually decided in an emergency GA to take down some tents in order to give ourselves the ability to surround the tents and link arms in the event of police intervention. So exhausted -- yet exhilerated -- after the events of the last week (my shoulder is only getting worse...). Please, if you are in the area, we're going to need people on Sproul Plaza all day -- it's only a matter of time before they try, once again, to take our tents.

10:17: Sorry it's been so long! My computer has been powerless for a couple hours. The rest of the evening has been beautiful. After approving the second proposal, the assembly took up the question of whether to reestablish the encampment. An extended, compelling discussion followed, and then 88% of the assembly voted to do so, at which point a number of tents were carried into the middle of the assembly. Then, the mic was turned over to the Mario Savio foundation, at which point the crowd swelled to over 5,000 people. Many students sat on the roof of the Chavez building. Mario's relatives gave a number of readings of his more famous speeches, before moving into their awards, and then Rob Reich's talk. After the talk, more tents were brought in, and a fabulous dance party on the steps commenced. Last I heard, the Fugees were being broadcast. The energy in the plaza tonight was electric. 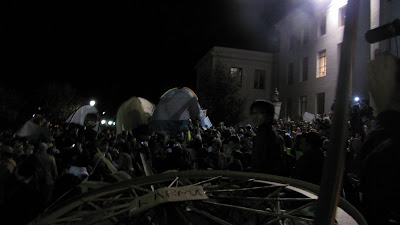 6:32: First proposal -- to invite the governor, chancellor, and regents to campus for a public debate on public education -- passes with just over 80%. Now considering an open letter to administrators and the governor that declares, more or less, the following:

If you don't refund public education, reduce fees, and reverse privatization, we will strike, beginning February 1.

5:57: Just saw an update that Mrak hall is occupied at UC Davis.

5:20: GA is getting underway. We just had a reading of Mario Savio's famous speech about shutting down the machine. The chancellor has been sending laughable emails all week... today we got another (complete with shouting), which indicates how terrified they are of our collective power:

To the Campus Community:

We all share the distress and anger at the State of California's disinvestment in public higher education.

IN THE SPIRIT OF TODAY'S DAY OF ACTION, I AM URGENTLY CALLING ON THE POLITICAL LEADERSHIP FROM SACRAMENTO TO COME TO CAMPUS TO ENGAGE WITH ME AND STUDENT REPRESENTATIVES IN A PUBLIC FORUM TO DEBATE THE FUTURE OF PUBLIC HIGHER EDUCATION.

The issues require bold action and time is short. I will inform you of the time and place as soon as possible. 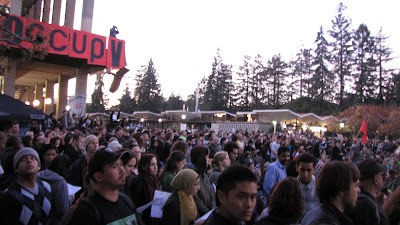 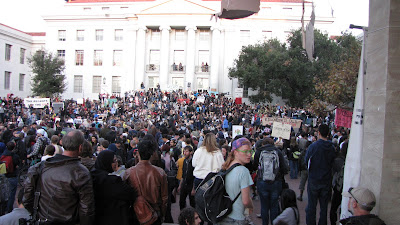 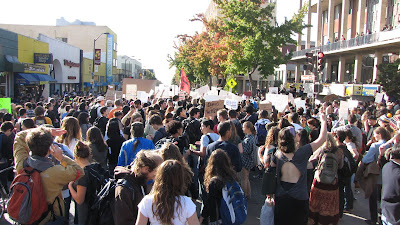 1:24: Update from UC Davis: today's rally had over 2000 people at its peak, and students are still gathered at this moment. 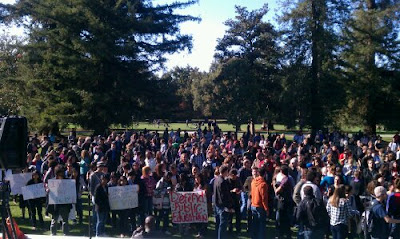 1:22: Just got a report that there are 40-50 cops trolling around the open university. The morning was largely cop-free, so this potentially suggests a more aggressive posture by UCPD. Still hoping that our numbers and broad support will deter them from intervening.

12:44: Just got back from the noon convergence, and Sproul is like nothing I've ever seen before. So many people, such beautiful energy and care coursing through the crowd. A gospel choir has been singing protest songs for the last 20 minutes or so, and teach-ins are beginning. 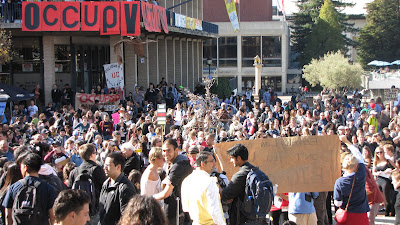 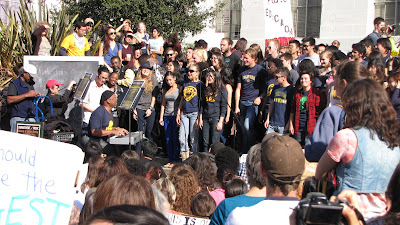 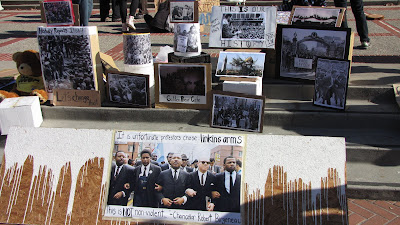 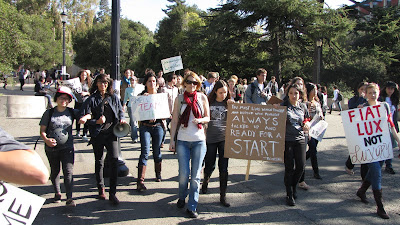 10:56: Teach-outs have been happening all morning at Sproul. And the plaza has been transformed: 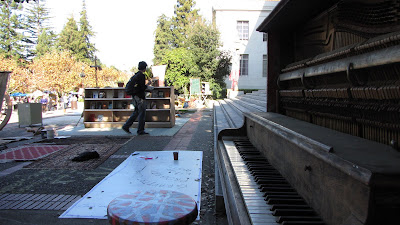 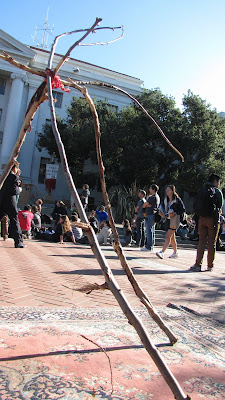 Heading now to the 11am English department convergence.
Posted by a at 10:52 AM