On November 9th, an outdoor encampment, modeled after the encampments in New York, Oakland, and other cities worldwide, will be established at UC Berkeley in order to protest the privatization of public education. We write to express our support for the project of Occupy Cal, and to state publicly that we view outdoor encampments as a legitimate and potentially transformative form of political activity. The occupation at UC Berkeley—like other occupations established this fall—constitutes an instance of free assembly and should be allowed to persist and reproduce itself free of police interference.

We understand that the occupation at UC Berkeley will be organized through daily general assemblies; will enable important political discussion and debate over contemporary social conditions; and will provide for the material needs of students, workers, and wider community members, offering emergency medical care, food, basic supplies, legal support, and a place to live. The encampment will also allow for the emergence of creative and other effective responses to the interrelated crises we’re living through, including those that threaten public education.

UC Berkeley should be a place where political expression and assembly are encouraged. Public fora, as envisioned for Occupy Cal, should be able to convene free of police violence, and there should be no temporal restrictions on assemblies or encampments. The University should not arbitrarily restrict the right of the public to assemble on its grounds, and certainly not when such assemblies contribute to the education of the campus community, and when it is possible for such activity to take place alongside of, or as a supplement to, formal teaching and research regimens. Furthermore, in no way will this encampment disrupt or restrict any student’s ability to attend classes.

If University administrators decide to arbitrarily restrict or repress public assemblies on campus, including those associated with Occupy Cal, they would do so ostensibly in the name of policy and public safety. In truth, however, they would be acting in violation of the sentiments of representative student bodies including the GSA and ASUC, the appeal of the undersigned organizations, and the promise of the public university. They would enforce, through blunt force, the enclosure of our educational commons—a privatizing turn the UC Regents are also imposing through layoffs and fee hikes. By calling on the police, University administrators would subject students, workers, and community members to potentially traumatizing police violence and incarceration—a reality that we will not allow to be papered over by cold, bureaucratic discourse about policies, finances, and purported public safety concerns.

We stand with the encampment. 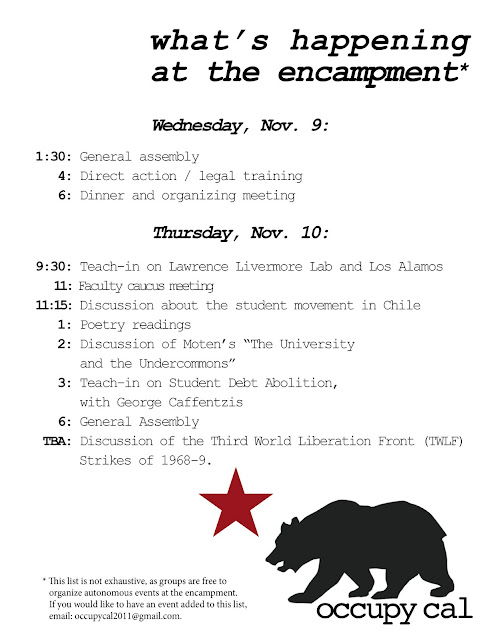