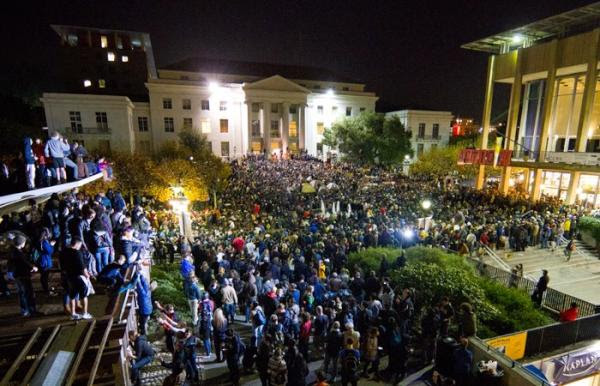 Robert Reich’s Mario Savio Memorial Lecture drew a couple thousand people to the Savio steps last night — fewer than the numbers who had already been there for hours, for the General Assembly of Occupy Cal. When Clinton’s Labor Secretary arrived, old people were really psyched. And surely he said some things worth saying. He was right to note that “the days of apathy are over, folks,” though he was a couple of years behind the curve. A more attentive thinker would have noted that the walkouts, occupations, and police brutality that shuddered and shuttered his campus (and others) two years before were equally large, equally non-apathetic, and declared the exact same concerns. They were perhaps less to his taste then, before they had been validated by a swelling popular movement that provides not just context but a kind of ideological cover for professional ideologues; the sudden discovery of this new movement is in fact a sterling demonstration of cowardice and belatedness.

Here are just one or two Reichian comments worth remarking upon further. “I will believe that corporations are people when Georgia and Texas execute them,” he said, referring to the Citizen’s United decision affirming corporate personhood. It’s a good line, but I will believe corporations are people when damage to their windows is treated as commensurate with violence against people. Oh, wait. By which I mean, if Robert Reich truly wants to distinguish between corporations and people, he needs to recognize that one exists at the expense of the other, that it is already a violent relationship, and that the laws he upholds — the same laws that murder prisoners in the south — offer corporations protections at the expense of people from the front to the back of the law books. Until then, his witty comment is in fact trivial, and as well an insult to those affected by the thoroughgoing racism (among other things) of the legal institution tout court.

But surely Reich’s most troubling suggestion of the evening was that “Every social movement in the last half-century or more, it started with moral outrage…and the actual lessons, the specific demands for specific changes, came later.” The meaning, we fear, is clear enough. There must be specific demands for specific changes. That is the inevitable passage of your sense that something is wrong, deeply and absolutely wrong, with things as they are. This is just a phase, people. And I am here with my understanding, and my belated recognition, to validate you. And once this sense of outrage has passed — moral outrage mind you — and you are ready to see what kinda deal you can cut, we will have achieved a mature movement.

To which the only adequate response is, go fuck yourself, Robert Reich. The outrage may be “moral” but it is also personal, with that special feeling one has for cops that beat you and administrators who lie about that and everything else. It is also intellectual, based on a clear class analysis and a better understanding of the direction of the global capitalist economy that you seem to have, with your dogmatic presumption of some return to a mildly better degree of wealth inequality that should set things to right. Maybe you should specialize in moral outrage, Mr. Reich, since you don’t seem to have much of a handle on the actual situation.

And more importantly, the outrage isn’t going to pass away into a set of banal, kinder-gentler-capitalism policy prescriptions of the sort you have poured into a series of phenomenally boring books. It isn’t going to wait for the opportune moment to sell itself for some trinkets, a signed apology letter, and three new and perfectly lax regulating agencies. Bargain, bargain — that is Moses and the prophets to your type. The limits of your imagination, Former Secretary Reich, are shocking in their obviousness and in their closeness. We do not require your paternalistic validation nor your liberal blandishments, which pretend to support and even to shared outrage, while buttressing ceaselessly the very world we have set out to undo.

Signed, a hungry comrade
Posted by d at 1:17 PM