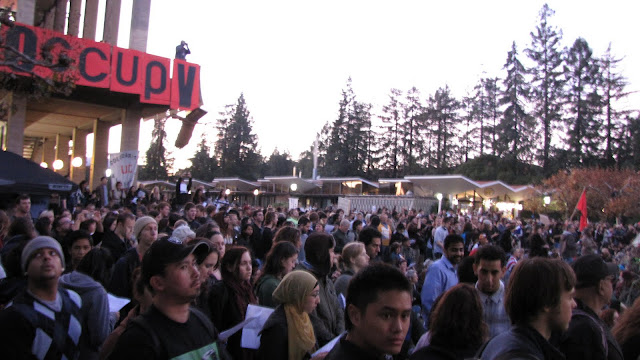 On November 15, 2011 thousands of students, faculty, and staff filled Sproul Plaza to participate in the Occupy Cal general assembly. (Crowd total estimates range from 5,000 to 10,000.) The GA discussed and voted on three proposals, all of which passed with over 80% consensus.

1) Organize a Public Debate with Jerry Brown, Mark Yudof, the Chancellor, etc. on How to Stop the Cuts and Refund Public Education at UC Berkeley in the First Week of December, 2011

2) Issue an Open Letter To the Authorities To Meet Our Demands Before Feb. 1, 2012 Or Face a Wave of Actions and Strikes (Letter Copied Below)

3) Peacefully but Firmly Reestablish Occupy Cal’s Tent Encampment (Last night, Occupy Cal succeeded in camping out. Despite multiple threats, the police did not end up raiding the camp.)

Quality public education is a basic human right, not a privilege. We call on you to publicly declare your support for the following:

2) Refund education and public services by taxing the rich and the corporations.

4) Respect free speech and free assembly. No use of force against protesters on school sites.

If you fail to issue such a statement, and if you fail to take concrete actions in this direction, we will begin a wave of actions, up to and including striking, beginning on February 1, 2012 to ensure that our demands are met.

We call on all California students, teachers, workers, and their organizations to sign this Open Letter and to organize and mobilize around it at their sites and in their communities.

*** We call on the UC Regents to immediately sign this Open Letter and join us on our Nov. 16 march on the banks and the State Building beginning at 1pm in San Francisco, Justin Herman Plaza. ***