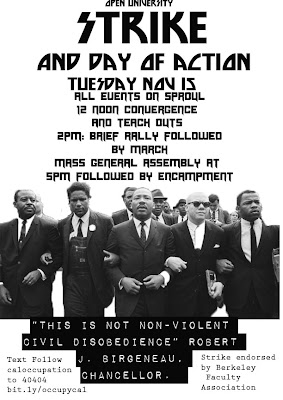 After a mass rally and march of over 3,000 people, and repeated police assaults on the Occupy Cal encampment, the general assembly at UC Berkeley decided on the night of November 9th -- with over 500 votes, 95% of the assembly -- to organize and call for a strike and day of action on Tuesday, November 15. We ask that all classes be cancelled or held at Sproul Plaza.

The Open University strike is both a response to the University’s violent raid on the encampment, and an action against the defunding and privatization of public education in California.

We will strike to reassert our collective right to freely assemble, both at the University and elsewhere, so that we are able to build public spaces where we can discuss and counter the various crises affecting our communities. We stand in solidarity with the Occupy movement, and especially with Occupy Oakland, which has been, and may again soon be, repressed by the city of Oakland and the Oakland Police Department.

We will also strike to reaffirm our determination to fight for a truly public and free University, and for the refunding of all levels of public education and public services. Since the crisis of 2008, the UC Regents have accelerated their push to privatize the University, subjecting students to unsustainable levels of debt, excluding increasing numbers of students, and further resegregating public education in California. The policy of privatization also subjects workers to layoffs, work speedups, and drastic benefits reductions. All these regressive transformations are forms of structural violence, which the police enforced against the assembled students, faculty, and workers on November 9th.

We call upon all sectors of public higher education in California to take actions on Tuesday, November 15th, up to and including strike actions, and to join the mass convergences on November 16th at the UC Regents meeting and the CSU Trustees meeting. We also call upon workplaces and K-12 schools to join us, either by taking actions at their sites or by converging on UC Berkeley and helping us to open up and transform the University from which most Californians have been systematically excluded.

Please join us on November 15th as we stop business as usual at our University in order to open up and transform our campus, and as we reestablish the Occupy Cal encampment.

Local Demands
- Respect Free Speech, Including the Right to Set Up Tents.
- Immediate Resignation of Robert Birgeneau, George Breslauer, Harry LeGrande, and Mitch Celaya. Democratic Election of their Replacements by Students, Faculty, and Staff.
- Charge the Police Responsible for Brutalizing Protesters. No Use of Force Against Protests on Campus.
- Amnesty for All Protesters.
- Make UC Berkeley a Sanctuary Campus for Undocumented People. Pass the UC-wide Dream Act.
- Equal Benefits and Retirement Security for UC Union Workers.

Nationwide Demands
- Stop the Privatization of Public Education.
- Bail Out Schools and Public Services. Redirect Military Funding to Education.
- Immediate Forgiveness of All Student Debt.
- Repeal Race to the Top.
- Stop the Attacks on Teachers Unions.