Our Blood is on Their Hands 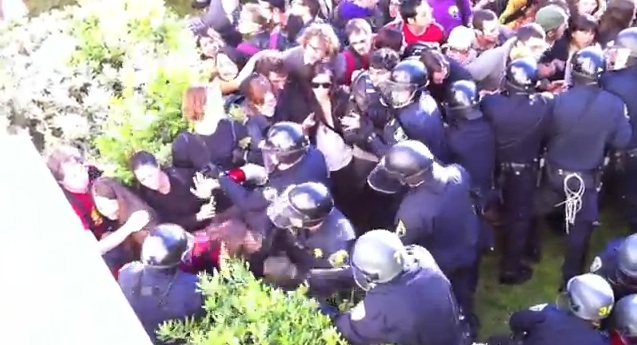 This piece was written by a UC Berkeley graduate student who was beaten and arrested on November 9.

In September 1964, a group of students at UC Berkeley set up political information tables on Sproul Plaza in defiance of a ban on unauthorized political and religious activities on campus. This act of civil disobedience and the sit-ins, scuffles with police, and arrests that followed, came to be known as the Free Speech Movement. It is a proud moment in Berkeley’s history and one that our community rightly celebrates as a turning point establishing our community’s commitment to protecting and defending first amendment rights.

Sadly, Chancellor Birgeneau, his administration, and UCPD have repeatedly dishonored and tarnished the legacy of the Free Speech Movement over the last three years, most recently in Wednesday’s savage attacks on non-violent student protestors at Occupy Cal. Students once again assembled in Sproul Plaza to voice their concerns about the direction of the university and the nation, and again they committed acts of civil disobedience, defying campus rules on overnight camping and attempting to pitch tents on the lawn.

In a campus-wide email sent Thursday, Chancellor Birgeneau argued that “obstruct[ing] the police by linking arms and forming a human chain to prevent the police from gaining access to the tents…is not non-violent civil disobedience.” True non-violent civil disobedience, according to Birgeneau, includes only the actions of those who “were told to leave their tents, informed that they would be arrested if they did not, and indicated their intention to be arrested,” not the hundreds of students who formed human barricades to “resist arrest or try physically to obstruct the police officers' efforts to remove the tent [sic].”

Chancellor Birgeneau’s attempt to delegitimize Occupy protestors is understandable given the strong public stance his administration has taken against allowing camping. It is also deeply misleading. What Birgeneau lionizes in his email is civil obedience to police – and ultimately administration – authority. Students should do as they are told and submit voluntarily to campus regulations. Failing that, they should make only token displays of dissent while simultaneously submitting to police authority when ordered. Protestors should, in essence, arrest themselves.

In contrast to obedience, non-violent civil disobedience in the tradition of the Free Speech Movement is, in fact, precisely what hundreds of students practiced on Wednesday. Standing together arm in arm, protestors weathered wave upon wave of attacks by police in riot gear who beat and maimed protestors as they bravely stood their ground in what can only be described as a cop riot. Thirty-nine were arrested and scores more were injured by police batons, and yet for all the bloodshed that day police have found only two cases in which they have even alleged protestor violence against police. The video evidence is equally clear: students were overwhelmingly peaceful and non-violent while the police were overwhelmingly cruel and violent.

Truly non-violent civil disobedience is not just symbolic. It is a material act of defiance, a physical challenge to the existing order by bodies willing to absorb the physical violence inflicted by police, all in service to their cause. Occupy Cal protestors have followed in the footsteps of that noble tradition and they have suffered terribly as a result.

Don’t let Chancellor Birgeneau and UCPD fool you: our blood is on their hands.
Posted by d at 1:34 PM