Letter to Yudof and Regents from California Scholars for Academic Freedom 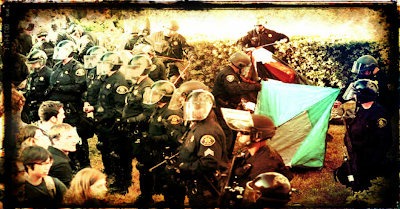 We write on behalf of California Scholars for Academic Freedom** to condemn in the strongest possible terms the egregious attacks by police forces on protestors at UC Davis and UC Berkeley in these last weeks, to object to the violation of their rights of protest, free assembly, free speech, and academic freedom. We have watched with great concern as waves of revulsion and shock have swept across the global media at the violent and injurious actions on the University of California campuses. We propose the following immediate steps.

We petition for an independent investigation of these actions to be conducted by faculty senate members and student representatives appointed by their own assemblies from the UC system free of administrative intervention or oversight. The mandate of such an investigation should establish who has authorized the police to unleash such brutal tactics of suppression and injury on protestors, and to establish a precise chain of command so that subsequent and appropriate actions, which would include censure demands for suspension and resignation, can be brought to bear on all those responsible.

It is completely unacceptable to appoint a former LAPD police chief to investigate police brutality within the UC system. William Bratton’s role as police chief during instances of police brutality against those at an immigrants’ rights rally in Los Angeles in 2007 hardly qualifies him to oversee an independent investigation into police brutality. In terms of Bratton's approach to "excessive force," he specializes in training police to deploy space-cordoning and crowd-control methods that are less violent, but which end up eliminating the idea of public space and public visibility altogether. This kind of vision is problematic for public spaces, but utterly incompatible with the notion of common spaces in public universities. More importantly, such an investigation should be led by those whose interests were directly affected by such police violence, and those whom this University is designed to serve, namely its students and faculty.

These attacks on students, staff, and faculty have been repeated over the last few years against peaceful demonstrations that have objected to the privatization of the public university system, the devastating hikes in student tuition and fees, the extreme burdens of student debt, the cutting of long-term and essential staff positions, and the increasing precariousness suffered by part-time laborers in the university system.

In particular, we object to the use of police forces with weapons to quell peaceful protests and civil disobedience actions. Protestors have a constitutional right to free speech under the US constitution, but they also have, as members of the university community, specific rights to exercise their academic freedom unimpeded and free of violent attacks.

At the time of this writing, it remains unclear who precisely authorized the violent attacks on student demonstrators during the weeks in November, 2011. It will not do to say, as President Mark Yudof does in his missive of November 20th, that he is “appalled by images of University of California students being doused with pepper spray and jabbed with police batons on our campuses,” without taking any responsibility for these acts of police violence against peaceful protestors. Nor will it be sufficient for the President to initiate reviews of these incidences at all campuses, or to propose engaging in “discussions’ with all of the chancellors. Vague gestures designed to give the impression of administrative action—without any assignation of responsibility or any revision of policy- remain both implausible and inadequate. Although Chancellor Katehi of UC Davis claims not to have anticipated the use of pepper spray, she nevertheless takes full responsibility for her action. If she did not authorize those actions, who did? And the Chancellor of UC Merced claims that she “will neither order nor condone police aggression or force during a protest on campus in the absence of an imminent and substantial threat of harm to persons or property” (11/20/11). If this is so, does she break with UC system-wide policy in making this claim?

If the UC administration claims that it was following “established procedure,” and that established procedure violates the academic rights of students, staff, and faculty engaged in peaceful protest, then that established procedure must also come under scrutiny. The Regulations Governing Conduct passed recently by the UC Regents provoked many objections from faculty and students in the notice and comment period. The justifications offered by the administration for much of the violence of the last few weeks are spurious, citing the university’s prohibition of (among other things) structures and tents on campus (something that happens regularly for sports events, freshman receptions, and large parties). In defending the police brutality at UC Berkeley, Chancellor Robert Birgenau disqualified the linking of arms as a “nonviolent” act. Do President Yudof and the Regents endorse these blatant attempts to cast peaceful protestors as violent thugs and terrorists, by twisting the very definition of nonviolence? In the absence of any response to the contrary, these assertions suggest that the UC administration needs reminding of what kinds of actions constitute peaceful, nonviolent, and morally-motivated political protest, and require protection as such. The definitions of civil disobedience and non-violent protest are well-established and cannot be subject to ignorant or strategic interpretations of police or administrators.

It is unacceptable for any campus to criminalize free speech, freedom of assembly, and academic freedom. It is unacceptable to unleash police to commit criminal acts of violence against those who are exercising constitutionally protected rights or who are expressing viewpoints that are critical of the UC administration. It is unacceptable to pretend as though police officials who are hostile to the idea of public visibility, with records of involvement in instances of police violence, can “independently” oversee any investigation of such matters. And, it is unacceptable to distort the very meaning of nonviolent protest in order to justify such acts of institutional violence.

Finally, we propose that if the chain of command is clearly established and those responsible for authorizing the use of police force to injure protesters can be clearly documented and named, that (a) those responsible be relieved from their official duties, and (b) that the UC system, in tandem with the CSU system, develop a policy that requires police to forego the use of any weapons in the monitoring of free and peaceful demonstrations on any of our campus.

**CALIFORNIA SCHOLARS FOR FREEDOM is a four-year old group of more than 150 academics who teach in 20 California institutions of higher education. The group formed as a response to rash violations of academic freedom that were arising from both the 9/11/2001 climate of civil rights violation and to the increasing attacks on progressive educators by neo-conservatives. Many attacks were aimed at scholars of Arab, Muslim, or Middle Eastern descent or at scholars researching and teaching about the Middle East, Arab and Muslim communities. Our goal of protecting California Scholars and students based mainly in institutions of higher education has grown broader in scope. We recognize that violations of academic freedom anywhere are threats to academic freedom everywhere.

Photo from flashmobyoga.
Posted by a at 10:23 AM