Is the asshole who, as thosewhouseit has discovered, smashed our compañera's hand so hard with his baton that he literally severed her fingers. For no reason. She was resting her hand on a metal barricade. The image above comes from this video, taken outside Wheeler Hall during the occupation (the important part starts around 1:35). It was filmed just before Tinney's attack:

What did the police review board say about this? After doing an investigation, they declared it a "reasonable" use of force. It was "proper, lawful, and appropriate under the circumstances." Here's the key paragraph from the review board's report:


The Board’s goal was to look at the actions of the officer and determine if they fit within the parameter of reasonableness. The officer clearly communicated several warnings to you with instructions for you to keep your hands off the barricades. In fact, you initially complied with those warnings and temporarily removed your hands from the barricade. It was only after your failure to heed the repeated warnings that the officer increased his level of force from a verbal admonishment to a strike against the rungs of the barricade. When you again returned your hand to the barricade, the officer applied the next level of force by striking you. The Board determined that the officer used a continuum of force that was within reason and within his authority during these circumstances. The Board’s finding of your allegation is exonerated.

Which makes sense. In the end, cops will never indict other cops, just as UC administrators will never indict other administrators -- as long as they can get away with it. Within the structures they have created to facilitate their rule (internal review boards, specially-appointed task forces, and so on), no challenge to that rule can possibly emerge. The only possible line of attack evades their attempts at capture, going outside the bureaucratic procedures laid out precisely by those responsible for the violence. That's why this lawsuit is so important.

The lawsuit names UCPD Chief Mitch Celaya and second in command Captain Margo Bennett. Why them and not Officer Tinney? Because they refused to disclose the name of the officer responsible for the brutal attack. This is to be expected. But now we've figured it out on our own.

Special bonus: Officer Brendan Tinney's LawOfficer Connect page, which seems to be something like LinkedIn for pigs: 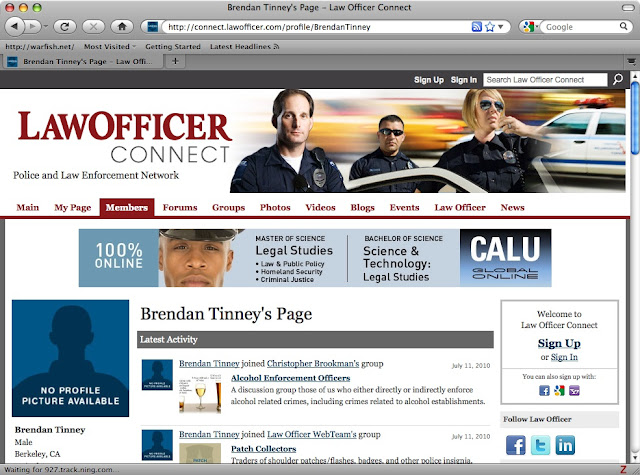 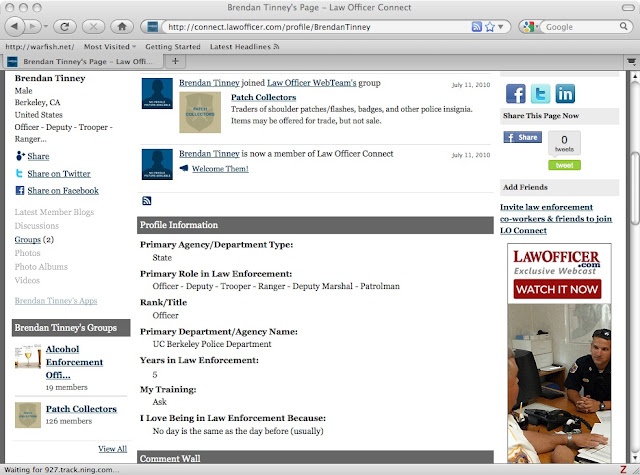 Why does Brendan love being in Law Enforcement? "No day is the same as the day before (usually)." True! Yesterday you were being protected -- and today you've been exposed!

[Update Monday 3:17 pm]: We've just learned that Officer Brendan Tinney has a twin brother named Sean, who is also a member of UCPD. No, we're not making this up. It's possible, then, that the Tinney in the picture above is actually Sean Tinney and not Brendan. Word on the street, though, is that Brendan is more of an asshole than Sean is. (The tree-sitters referred to the Tinney brothers as "B for bad" and "S for so-so.") In any case, this development certainly gives the story an interesting twist.
Posted by d at 10:43 AM