Last night, what may have been the last conduct hearing regarding the fall 2009 occupations at UC Berkeley took place. Josh Wolf, a graduate student in journalism as well as a press pass-carrying journalist, was in Wheeler Hall during the occupation to report on the action from the inside. The extended hearing involved the university's attempt to prohibit the use of Twitter and, more importantly, turned on the administration's inability to understand what journalism means. Jeff Woods, the prosecutor from the Office of Student Conduct (OSC), argued that Wolf should have physically intervened, attacking and overpowering the other students involved in the occupation instead of observing, taking notes, and filming. (How's that for health and safety?)

During this hearing, unlike the last two, Wolf was denied the right to have his adviser represent him, which many believe (including the ACLU of Northern California) constitutes a fundamental violation of the constitutional right to due process. In the last two hearings, in which advisers were allowed to speak for their clients, the defendants were found not guilty of any of the charges. Wolf, on the other hand, did pretty damn well for having to defend himself -- not guilty on the charges of endangering health and safety and unlawful assembly, but guilty on the charges of failure to comply, trespassing, and obstructing teaching. Fortunately, his performance was good enough to make the hearing panel recommend a sanction of... nothing! Not even a warning, which is the lowest possible sanction. (Maybe it had to do with the fact that he played this video during the hearing.) If you're interested in checking out line by line coverage, use this Twitter list (thanks to @callie_hoo).

It looks like Jeff Woods, perhaps the most incompetent bureaucrat to ever work for UC Berkeley, has lost another one.

Even if this round of conduct charges has concluded at UC Berkeley, that doesn't mean we can let our guard down. Student conduct -- as well as criminal charges -- are still being leveraged against student protesters at other campuses. Today, the Sacramento State administration is coming down hard against the protesters who launched the sit-in that would last four days before being evicted in the middle of the night by riot cops. Here's their call for support:


The Sac State 4 are four students who are being singled out by administration, and facing disciplinary action for their supposed involvement in the April 13th day of action and sit in.

They have a meeting today (4/28) with the administration to discuss what will be done. There will be a silent protest outside of Lassen Hall in support of these sudents. What the administration is doing to these students is unacceptable. Please show your support!!

Solidarity with the Sac State 4! Drop the charges! Abolish the Code of Conduct!

[Updated Thursday 7:22pm]: This just came over the Twitter: 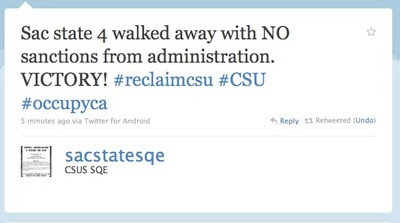