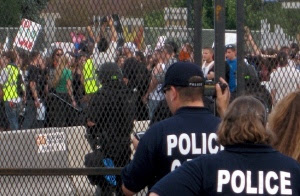 Oh the irony. The UC Berkeley administration has long demonstrated a tendency toward censorship, despite its supposed "free speech" credentials. From "Time, Place, and Manner" regulations which attempt to restrict political activity to Sproul Plaza, to UCPD cops breaking into department libraries to steal students' materials, to the criminalization of chalking and distributing fliers, the so-called "home of the free speech movement" has become a complete joke.

Now they're trying to keep students from using Twitter. 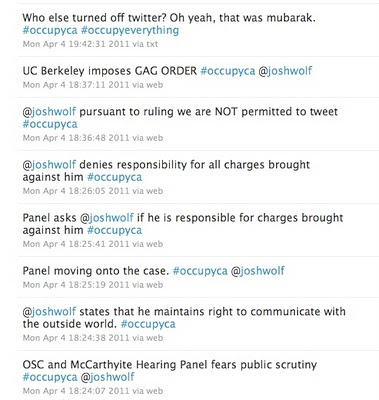 This past Monday, during journalism student Josh Wolf's student conduct hearing for his presence at the Wheeler Hall occupation, the hearing panel all of a sudden discovered that @callie_hoo was live-tweeting the proceedings. Threatening the defendant, they demanded that the tweeting immediately stop. It is the height of irony that they would do this to a journalism student who was in Wheeler to document the action.

Now, we've just learned that the UC Berkeley administration is unilaterally threatening to cancel the negotiations about Operational Excellence planned for Friday afternoon. Chancellor Birgeneau agreed to meet with students as part of the concessions won during the occupation of the Wheeler ledge. The administration has thrown around the idea of canceling the meeting because they're scared that a rally might take place at the same time. Pobrecitos. In any case, we wanted to quote a line from the email sent to the negotiating team by Felicia Lee, Birgeneau's bureaucratic lackey. If the "dialogue" takes place, she writes,


As a matter of respect for all attendees, no tweets, texts, or recordings during the meeting are permitted. I trust you and the others will honor this request.

Home of the Free Speech Movement, indeed. Remember, these are some of the same folks who wanted to call a administrative unit specifically designed to monitor and infiltrate student protest actions the "Freedom of Expression Support Team." These people are sick.
Posted by d at 9:09 PM