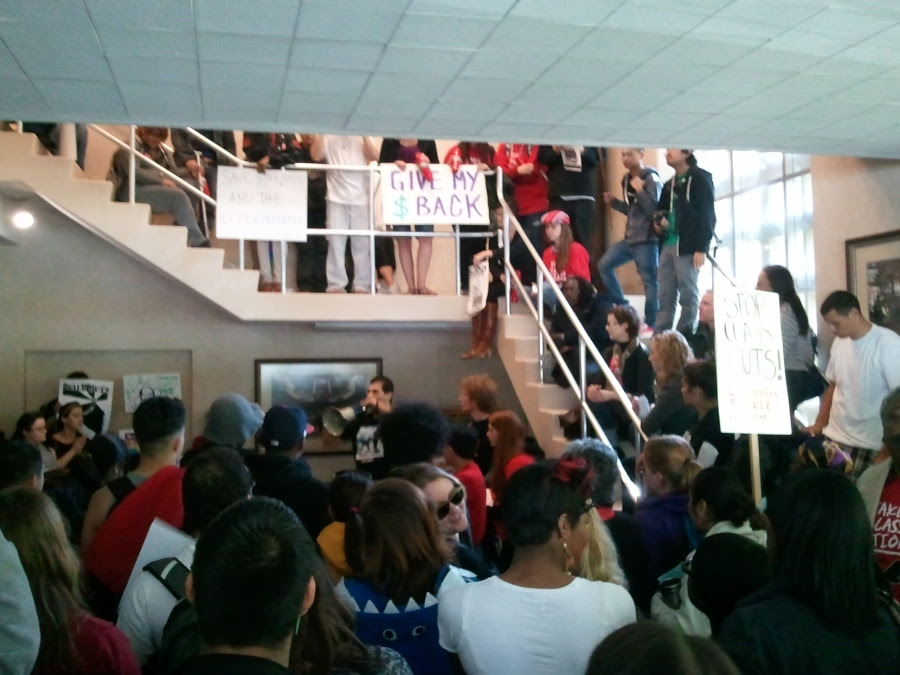 The occupation at Sacramento State continues into its second night, after 18 students slept there last night and kept the building open. Check em out on the blog and the twitter. Here's the demands, as of this morning:


1. A moratorium on managerial raises and salaries; Funding must be focused on instruction and student services.


Their full communiqué is after the jump:


The CSU system is failing, plain and simple. Chancellor Reed and the Board of Trustees continue to raise tuition (a rumored 18% increase for next Fall), cut classes, and increase class size. Tuition has been increasing unpredictably since 2002, and by cutting classes students have to postpone graduation, and by increasing class size they are decreasing the quality of our education. We, as students, are tired of it!!

President Gonzalez was absent from the University, as were the other 22 campus Presidents. Unable to meet with our President we presented our Vice President with over 900 signed petitions supporting our demands. Because we were unable to meet with President Gonzalez, we stayed until the building closed, at 5:30pm. At that time we again spoke with our Vice President, who said that he would personally talk to the President and give him the demands. We asked the V.P. if we could send a delegation of three students with him when he meets with the President. He told us that he could not promise that because he could not make decisions on behalf of someone else. Then he went home. Collectivly we decided that we would not leave. As a group we would not leave until we could have our meeting with President Gonzalez. The campus police were respectful of us because we are a peaceful and nonviolent movement, and didn’t keep us from spending the night in the building.

At 7:00am on April 14 we came up with a list of three demands for President Gonzalez.

1. A moratorium on managerial raises and salaries; Funding must be focused on instruction and student services.

AB 1326 would charge a tax to the oil companies that drill for oil in the state of California. California is the only state that does not charge some kind of tax for the extraction of oil. The revenue recieved from this tax would be specifically for higher education. This would ensure that the CSU system had sustainable income.

SB 8 would make the CSU budget transparent. We do not know exactly how much money the CSU recieves and where that money goes. There is no accountability.

Our movement is growing, our numbers are growing. Through social networking sites, such as facebook and twitter (and now this blog!) we are getting the word out to our fellow students and our community. Every student has a personal story about how they have been affected by the budget cuts. We are sharing our stories at our sit in and learning that we are not alone in this fight.

The CSU system is a People’s University. Which means it should be affordable to the people. Education is not a privledge it is a right. We as students have to fight for our higher education, if we leave it to President Gonzalez and Chancellor Reed they will run it into the ground. April 13th was just the beginning, there is more to come. Much more to come. So I will end this post with….