This afternoon, after a joint teach-in on the administration's plans to consolidate Gender and Women's Studies, Ethnic Studies, and African American Studies, a group of nine students began a hunger strike in front of California Hall. Some of the strikers are veterans of last year's hunger strike as well. Their demands are the following:


1. Reinstate the FTE staff positions in Ethnic Studies cut by organizational simplification under Operational Excellence
2. End the current process of Operational Excellence
3. Publicly support the Legislative Resolution ACR 34, co-authored by Ricardo Lara and Luis A. Alejo in Support of Ethnic Studies in California.
4. We demand that the administration publicly acknowledge the unfulfilled promise of the creation of a Third World College at UC Berkeley.

The administration has released an official response, which is available here. As expected, it not only treats the strikers like irrational children, but furthermore completely fails to respond to their demands. Instead, it tries to make them disappear by asserting that, despite all available evidence, the administration in fact shares the same goals: "Our hope is to understand one another better, given that we have the same ultimate goals for equity and inclusion." Oh really. Flashback to Yudof's recent comments on what he called the UC's "compass points":

"We are moving dangerously close to having to say: pick two of the three. That’s my view, and the excellence is nonnegotiable," he said. "We are going to have to look at access and affordability."

But we don't need to pick over the statements of UC administrators -- we have enough evidence right before our eyes. The fact is that through "Operational Excellence" UC Berkeley paid millions of dollars to the consulting firm Bain & Company to identify areas to "streamline" (that is, cut). As thosewhouseit reported earlier today from the hunger strike:


This afternoon, over 100 members of a coalition in defense of Ethnic Studies gathered at Sather Gate against the impending consolidation of their departments as part of Operational Excellence. OE, it should be noted, has now been exported to UCSB, UCSF, UC Davis, and UCLA.  We now have “Organizational Excellence,” “Operational Efficiency,” and God knows how many other variants. If Berkeley shelled out a cool $7 million to Bain, UCLA is using Huron, Davis ScottMadden Management, and Santa Barbara an “individual consultant.” Against this affront to Ethnic Studies under the guise of austerity, the 100-200 students and their faculty allies marched to California Hall after announcing the inauguration of a hunger strike. Eight students are now on hunger strike and stationed in front of California Hall.

There's one more piece of the administration's response that's worth noting. The concluding paragraph reads:


We are concerned that some students would endanger their health [or safety!!?!] by a hunger strike, and/or negatively impact their academic performance at the end of the semester. We have offered to meet with a small representative group, and this offer remains on the table. In the meantime, you are able to exercise free speech and protest, but are also bound by the campus rules on time, place, and manner (http://police.berkeley.edu/about_UCPD/news/news_101006.html). These rules preclude overnight lodging or camping.

Behind austerity measures, the threat of riot cops. But the administration's discourse is inherently paternalistic, even when it's actively engaged in threatening its students. This is reflected, to begin with, in the concern over "health [and safety]," a keyword that's been deployed frequently against student protest over the last year and a half. It also appears in the notion of "time, place, and manner" regulations, which proclaim the importance of free speech while relegating it to geographically isolated and temporally restricted areas. This is the logic of the "free speech" or "first amendment zone." Time, place, and manner -- a subject for a future post. 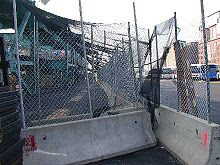