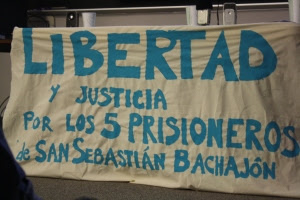 The Mexican Consulate in New York has been occupied by the Movimiento por Justicia en el Barrio in solidarity with five political prisoners from the community of Bachajón, Chiapas. On February 3, Chiapas state police raided the community and arrested 117 people. After worldwide protests erupted in response, the government released 112 of the prisoners. But five remain in jail, facing charges of murder or attempted murder.


The Bachajón Zapatista supporters are adherents to the Other Campaign, which was initiated by the Zapatista National Liberation Army (EZLN) in order to form national and global alliances amongst leftist organizations and movements.

The government has attempted to paint the conflict as a dispute between rival indigenous factions over control of a tollbooth that charges a fee to enter the Agua Azul waterfalls, one of Chiapas’ most popular tourist attractions. However, the Bachajón adherents and their lawyers at the Fray Bartolome de las Casas Human Rights Center (“Frayba”) say that they have proof that the tollbooth confrontation was designed to provoke government intervention and police occupation of the region. The Bachajón adherents argue that the government orchestrated the confrontation at the tollbooth “as a pretext to take over the Agua Azul Waterfalls Ecotourism Center for its transnational interests and projects.”

The occupation of the Mexican Consulate takes place on the fourth day a five-day campaign "5 Days of Worldwide Action for the Bachajón 5." Here's the message that was sent out, including the demands -- we've translated it into English (Spanish and Tzeltal are below the fold):


Compañeros from the alternative, autonomous, and independent media,

We have occupied the Mexican Consulate here in New York to demand the liberation of the Bachajón 5. In this way we are trying to ensure that the demands made by our brothers and sisters in San Sebastian Bachajon make an echo around the world. We ask that you help us spread the word. Later we will send a write-up and photos.

Our demands, which are the demands from San Sebastian Bachajon, are the following:

We demand the unconditional release of our compañeros, political prisoners who have been taken hostage by the bad government of Chiapas and Mexico.

We demand respect for the lands and territories of our mother earth within the framework of our autonomy as Indigenous Peoples.

We demand respect for our right to administer and care for our natural resources from our culture as Originary Peoples.

We will be posting updates and photos as we receive them.

[Update Monday 1:17 pm]: An article on the occupation was just published in the Mexico City daily La Jornada (in Spanish). Here's a rough translation of the opening paragraphs:


Mexico City -- This morning, the Movimiento por Justicia del Barrio of New York, adherent to the "other campaign," peacefully occupied the offices of the Consulate of Mexico in New York City, in order to demand that the government of Chiapas release the "Bachajón 5." The action took place as part of a worldwide campaign that has been developing in many countries since April 1.

Protest actions have taken place in front of the Mexican Embassy in London, and the Consulate in Montreal. On Sunday, the Unión Sindical Solidaria, meeting in Paris, demanded the liberation of the five tzeltal peasants from San Sebastián Bachajón, Chiapas, who have been captive for five months facing charges for crimes they did not commit. The Association Ya Basta! participated this past weekend in anti-war marches in various cities of Italy, and included the release of the indigenous prisoners among their demands.

[Update Tuesday 11:40 am]: The Movimiento por Justicia del Barrio has released a communiqué (in Spanish) and some photos from the action. We've posted a rough translation here.


* * *
Below is the original message in Spanish and Tzeltal that was sent out from the occupation this morning: