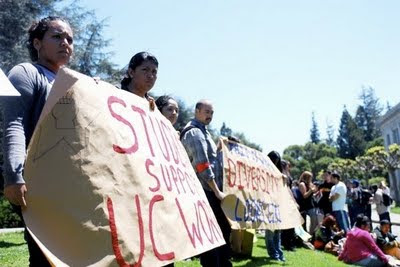 We wanted to post a couple quick thoughts and links in order to provide some context for the ongoing hunger strike at UC Berkeley right now. As we mentioned yesterday, protesters began the action in response to the administration's attempts to consolidate three departments -- Gender and Women's Studies, Ethnic Studies, and African American Studies -- as part of an restructuring initiative called "Operational Excellence" (OE). OE, which has been the target of previous actions, is basically an austerity program developed by the UC Berkeley administration in collaboration with an outside consulting firm called Bain & Company (which was paid $7.5 million for its efforts) to cut campus costs. As the Daily Cal reported yesterday, this model has been exported to other UC campuses, complete with their own ridiculously bureaucratic variations on the OE acronym like "Operational Effectiveness" (at UC Santa Barbara) and "Organizational Excellence" (at UC Davis). UCSF couldn't come up with another OE name, so they just adopted Berkeley's.

The UC Berkeley Faculty Association has a set of documents about OE here. But we wanted to quote Chris Newfield's thoughts from last fall on Bain & Company's OE report, because he treats OE as an administrative apparatus instead of getting mired in the details:


The image is the bureaucratic version of the alien ship in Independence Day, a looming, inverted pyramid in which top dwarfs bottom and threatens to swallow it whole. Everything flows top-down, and the administrative content takes the form of goals-metrics-evaluation which are communicated to units (metrics -- assessment of performance), on down to supervisors (accountability functions) and then finally to individuals (performance metrics tied to unit goals.) Relationships are reduced to the abstract modalities of compliance embodied in assessment procedures. Management is not support for the university’s necessarily diverse creative functions but is a state of permanent evaluation. There is no respect here for the autonomy of the units -- departmental staff, student services, and technical staff for laboratories -- that are close to the “customer” (cf. “autonomous culture” as a source of inefficiency in procurement, slide 35). The tone is of control through communication, through finance, through even more of the endless audit and evaluations to which UC employees are already subject. The implicit diagnosis is that Berkeley’s employees are inefficient because they are insufficiently assessed, measured, and financially incentivized. The diagnosis is anti-humanist, at odds with current literature about both human motivation (intrinsic) and effective organizational behavior (collaboratively organized). It is also ungrounded in evidence from the Berkeley campus. The predictable effect, as I noted at the start, is that the model contained in the report is already making staff efficiency worse.

I don’t have first-hand knowledge of how the Berkeley campus process is unfolding this week or this month, but the public documents are not promising. There is the OE czar, central process managers, hand-picked committees making implementation decisions in smoke-free rooms, and roving HR bands hired from the outside. There is nothing there about collaborative implementation, protections for productive autonomy, bottom-up integration, non-intrusive coordination of the decentralization on which organizational creativity depends.

In an op-ed published last week in the Daily Cal, Robert Connell, a PhD student in Ethnic Studies, frames OE in terms of diversity and specifically the departmental consolidation that provoked the hunger strike. Like Newfield, he makes the point that instead of "wrangling over statistics" we should be paying attention to the broader context and the process through which OE has been formulated and is being implemented. But Connell also brings up another important point, one that is often left out of these discussions -- the centrality of staff for thinking about campus diversity:


What rarely gets acknowledged, however, is that staffers within these departments play a significant role in cultivating campus diversity. They mentor marginalized students from various departments, assist in recruitment efforts and generally help to build a diverse sense of community, doing much of this outside of their regular paid duties. Students from many departments, both undergraduate and graduate, can attest that the terminated staffers have been vital supports to them throughout their time at Berkeley.

Therefore, OE, whatever its successes, deals a heavy blow to campus diversity, equity and inclusion because of the loss of individuals who are key to actually maintaining those realities. Nowhere does our coalition see evidence that OE planners took this into account.

This is important in terms of building solidarity between students, faculty, and workers -- something that the administration hopes to prevent at all costs. This is one reason, for example, they don't want union members to accompany students in negotiations, that they literally slam the door in their faces. It is notable that this happened during last year's hunger strike, when two members of AFSCME actually joined the student protesters in refusing to eat. Diversity, in other words, isn't just a question of how many students of color are admitted, as it is often treated. It's also a question of solidarity with those workers and students especially whose lives are made increasingly precarious through the administration's top-down imposition of austerity measures.
Posted by d at 2:14 PM