Not Guilty! Or, Jeff Woods is Incompetent 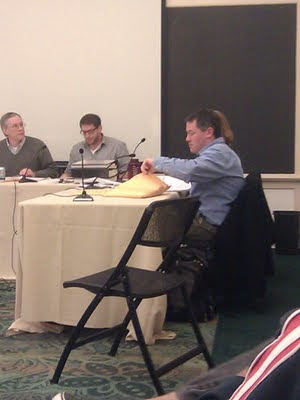 Another Wheeler occupier found not guilty after a long and drawn out disciplinary process. We've already talked in great detail about the numerous procedural violations that the Office of Student Conduct (OSC) has committed while attempting to pursue these cases against student protesters. Most of the time, the administration doesn't pay any attention to students when we call foul, when we file grievances, when we appeal these flawed decisions -- when we try, in other words, to hold them to their own rules.

But sometimes, every so often, things get so absurd that even a corrupt administrative apparatus can't abide by them. Absurd and incompetent. Jeff Woods, sitting at the right in the above image, is both.

Harsh but true. There's a good summary at thosewhouseit:


Once again, one of the 3 Wheeler occupiers arrested on the first floor of the building on the morning of November 20, 2009 was acquitted of all charges by the hearing panel convened by the Office of Student Conduct (OSC).  And once again, founding Campus Rights Project (CRP) member Thomas Frampton ripped both “Student Conduct Specialist” Jeff Woods and UCPD Corporal [Timothy] Zuniga, catching the latter in so many baldfaced lies that the Twitter feed reads like a satire – though of course it’s not.  Oh God, and Woods: despite the fact that Zuniga lied in a nearly identical case early last month, Woods still brought him in as OSC’s main witness. Moreover, Woods wanted to hold it against our comrade that he invoked his right to remain silent and have his adviser (Frampton) speak on his behalf, and he wanted to hold him accountable for barricading Wheeler without providing a shred of evidence that he did so. Even the arresting officers couldn’t remember if they saw him violate any provision of the Code of Conduct! The only substantial difference between the cases was the degree of exculpatory evidence in our comrade’s favor this time around. We urge you to read the meticulously documented proceedings here, guest-Tweeted by a number of our comrades from CRP. Congrats to our comrade and CRP, still fuck everyone at OSC and UCPD, and above all, abolish OSC! 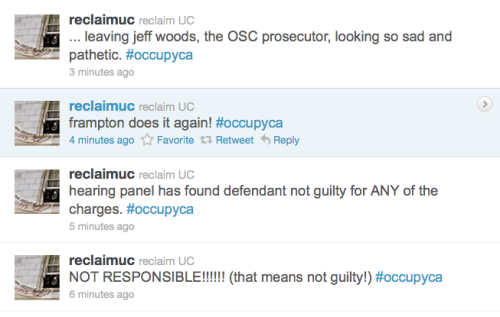 With this victory in mind, it's important to remember, as @santacruztacean points out, that students have only been found guilty when they have been denied the right to counsel, that is, when their advisers have not been able to speak for them. Let us state that again: in every case where the adviser has been allowed to speak for the defendant, the defendant has been found not guilty. What does that say about the conduct procedures? And what does it say about the other students who have been convicted?

We too want to recommend a quick look through the live-tweeted record of the hearing. It's a pretty amazing indictment of the credibility of OSC in general and of Jeff Woods in particular. (And also of UCPD cops like Officer Zuniga, who seems to have absolutely no problem with lying his ass off. Though it's not only Zuniga, of course -- cops lie.) Maybe he'll go the way of his former colleague, Laura Bennett, and quit in the wake of his disastrous performance. (Indeed, Bennett quit soon after Frampton crushed her in a previous hearing for another Wheeler occupier.) Though with his record, we honestly don't know if he'd be able to find another job...
Posted by d at 7:40 PM