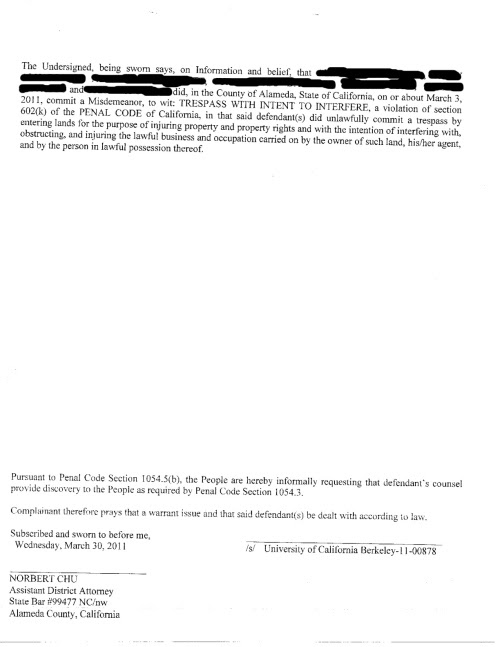 
Earlier this afternoon, the 9 students who occupied the rooftop ledge of Wheeler Hall at UC Berkeley on March 3 were charged with one count of misdemeanor “trespass with intent to interfere.”  We are posting a copy of the charge letter received by 7 of the 9 below; the DA did not charge the other two, as they had never previously been arrested for campus political activity.

If you recall, the terms of the negotiations during the occupation included the provision that no conduct charges would be filed against the students involved, and UCPD Chief Mitch Celaya told a law student on the negotiating team that he would urge the DA not to file charges. Of course this is far from what Celaya conveyed to the Daily Cal a few days later:


UCPD Chief of Police Mitch Celaya said police will encourage the district attorney to bring charges against the ledge-sitters. However, as of Friday, police had not yet brought the cases to the office for review, according to Deputy district attorney Teresa Drenick.

Back in fall 2009, especially after building occupations at UC Santa Cruz, folks at UC Berkeley spent a lot of time debating about whether it was better to make demands to the administration as part of an action, or not. A chant echoed across campus: "Demand Nothing, Occupy Everything!" There was something maybe too idealist, probably too abstract about these ideas. In practice, anyway, demands were often made. During the first occupation of Wheeler Hall, for example, the demands were tactical -- they responded to the situation on the ground, attempting to mobilize support and, for better or worse, define a "movement."

With demands come negotiations. There's a similar dynamic here, and it's got a slogan too: "No negotiation, occupation!" We know that a new round of "negotiations" is about to go down on Friday (though we have little faith in the administration's willingness to negotiate for real). The ledge action was somewhat successful, to the extent that the protesters were able to leave without being arrested and some conduct charges were reduced. It was also very successful in the sense that it re-energized a campus where political action had basically come to a halt. And it brought the administration to the negotiating table. But in light of the trespassing charges being filed against the ledge-sitters -- and UCPD Chief Mitch Celaya's blatant hypocrisy, though we should never be surprised about cops lying -- it's worth revisiting the old debate about demands/negotiations to reflect on what they've accomplished and where they've fallen short. We know it was kind of an annoying debate, but it seems like an increasingly important one to remember.

So on that note, some thoughts to remind and provoke:


In a sense, the byline of the movement -- occupy everything, demand nothing -- is prospective; it imagines itself as occurring in an insurrectionary moment which has not yet materialized. This is its strength; its ability to make an actual, material intervention in the present that fast-forwards us to an insurrectionary future. Beyond such a conflagration, there is really no escaping one’s reinscription within a series of reforms and demands, regardless of the stance one takes. Only by passing into a moment of open insurrection can demands be truly and finally escaped.

The prospective dimension of the earlier positions is confirmed by the fact that both the Nov. 20th Berkeley occupation and the Santa Cruz Kerr Hall occupation, the successor occupations, did have a list of demands -- demands which had a certain tactical logic in developing solidarity, and expanding the action, but that also suffered from the problems of scale, coherence and “achievability” that plague the demand as form. Nonetheless, what happened in both those instances was a massive radicalization of the student body, a massive escalation, one that was hardly at all countered by its superscription inside this or that call for reform. At Kerr Hall, the fact that the occupiers asked the administration for this or that concession was superseded, in material practice, by the fact that they had, for the moment, displaced their partners in negotiation: while they negotiated, they were at the same time in the Chancellor’s office, eating his food, and watching videos on his television. They did in fact get what they could take, and when the moment came, they didn’t hesitate to convert the sacrosanct property -- the copy machines and refrigerators -- into barricades.