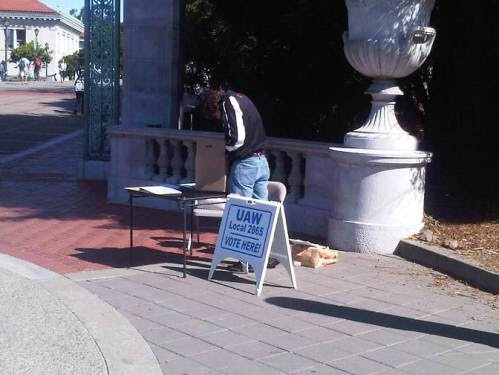 Here's our take on the whole story with the election fraud perpetrated by the Administration Caucus/USEJ. On one hand, we're so skeptical of these corporate hack careerist bureaucrats that at some level we're really not that surprised by their decision to exclude the ballots from Berkeley and UCLA and "partially certify" the results of the vote. On the other hand, it's so over-the-top, absurd to the point of being a cliche, that it's really difficult to understand how they could do something so obvious. It's like they're following a script written by third-rate union-hating conservative propagandists.

At any rate, we wanted to reference a couple of updates that our compañeros over at thosewhouseit have been posting. First, the hilarious claims made by Daraka Larimore-Hall, the Admin Caucus/USEJ’s candidate for President and the current President of UAW 2865, that in reality it's AWDU that's trying to steal the election. The evidence he presents is the above photo, which supposedly shows a member of AWDU tampering with a ballot box. There's just one small problem -- it was taken before the voting even began. "If it’s the end of the day," writes thosewhouseit, "then why is the sun shining from the east?" He's assembling the box.

Also, we wanted to post some info about the rally tomorrow (Monday) at UC Berkeley to demand that all the votes be counted:


I want to give you all a personal update on what has happened with the UC grad student union elections over the weekend. Most importantly, I am asking for everyone -- students and non-students -- to come out to Sather Gate TOMORROW (Monday) at 11:30am to demand our union count every vote. I know this sounds absurd, especially during finals week when we’re all stressed, but at this point we have to fight for our votes to be counted!

Elections for UAW Local 2865 -- representing 12,000 graduate student workers UC-wide -- ended on Thursday afternoon. All ballot boxes were taken to UCLA to be counted on Friday. There were many challenges concerning the boxes, their seals etc, but on Saturday morning the elections committee decided to go on with the count and then deal with each challenge afterward, as according to our bylaws.

Halfway through the count on Saturday, it became possible that AWDU (the reform slate I’m affiliated with) had won the elections. Rather than continue the count, the chair of the elections committee decided that the elections were “partially certified” and that the more than 1,500 ballots from Berkeley and UCLA (nearly half of all ballots cast) will not counted till the next meeting in July.

To put this in perspective: This is as if, in the 2008 national elections, the Republicans had decided to not count the votes of California and Hawaii, and to let a Republican-controlled congress decide how to deal with those ballots later. Would you find such a process fair? I didn’t think so. Would you do something about it?!? Hell yeah!

We need YOUR help to make sure all votes are counted!

1. Gather for a rally TOMORROW at 11:30 at Sather Gate. Then we will march to the union office in downtown Berkeley to demand that our votes are counted (meet us there at 12:30 if you can’t make it to Sather -- 2070 Allston Way). We really need everyone to come out to put the political pressure on!

2. Email the current UAW President Daraka Larimore-Hall larimorehall@uaw2865.org and demand that all the votes are counted! Please bcc me [awadu@googlegroups.com] so we can keep track of how many emails are getting sent.

3. Tell your friends! Please forward this email far and wide -- we need all the support we can get, from students and non-students alike!

Thank you to those of you who voted in this last election and showed your support in so many tremendous ways. In some terrible twist, if it hadn’t had been for all of your efforts, our current union leadership would not be acting so scared right now. But right now, this isn’t about which side will win or lose the elections -- this is about upholding democracy and our right to vote. Please come out and show your support.

[Update Monday 9:45am]: Here's a statement from the guy in the photo:


I am the person in the picture. I would estimate that it was taken around 10:00 a.m. on Wednesday, April 27. It could be a little before or after; I wasn't keeping track of the exact time. I was setting up the polling place at Sather Gate on Wednesday morning. This is a picture from just before I opened up the poll. I had tested the ballot box, and the way the slot had been cut, you could not get ballots to go in because the second layer of flaps blocked the opening. So I opened the box to tape those flaps down, then closed it again. After doing that, I finished arranging the materials on the table and opened the polling place. My solution to the ballot box design flaw didn't work particularly well, because the flaps inside came un-taped and the ballots got a bit gummed up inside. But I didn't open it again, because by that point voting had started.