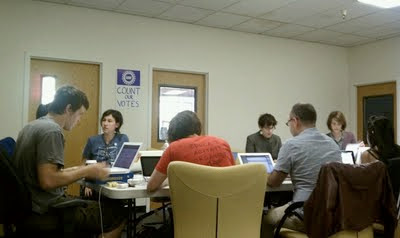 There are currently about 15 union members in the UAW statewide office, located at 2070 Allston way, suite 205 in Berkeley. A rally is scheduled for 11:30 on Sproul Plaza, and will turn into a march over to the union office to support and/or join the occupation. We will continue to provide updates as the day goes on.

Here's an email from Mandy Cohen, current head steward for UAW 2865 and running for recording secretary on the AWDU slate, announcing and explaining the action:


This weekend I witnessed one of the craziest things I've ever seen in my life. On Friday the counting of votes in our union leadership election began in LA. I drove down with other Berkeley and Santa Cruz AWDU members when we heard that all of Berkeley's votes had been challenged (meaning they might be invalidated). We arrived in the early hours Saturday morning and were able to help count the votes for Santa Cruz, Davis, Irvine, San Diego, Riverside and Santa Barbara. by 5pm all of those campuses were almost complete--and AWDU actually seemed to be breaking even.

The elections committee called an hour recess--and three hours later came back to say that the count was suspended, the results so far calculated were certified, and the rest of the count (including all 1500+ votes from LA and Berkeley) and all of the challenges were passed on to the Joint Council--which doesn't meet until July! The elections committee then immediately fled the building and abandoned the ballots.

All the members at LA sat down in the union office to make sure the votes were secured and to start lodging our protests with media, union officials, etc.

Late last night we drove back to Berkeley, had a meeting, and are now sitting down (in good UAW fashion) in the statewide union office until the elections committee agrees to resume the vote count. We have one demand: COUNT OUR VOTES.

We cannot let our votes be thrown out! This is exactly why we were forced to form the Academic Workers for a Democratic Union more than a year ago, though these actions are almost incomprehensible in their disregard for union democracy and members rights. Please join us at the office as soon as possible (2070 Allston Way, Suite 205) or come to the rally at Sather Gate at 11:30 and march to the office.

A call is planned at 1pm today between incumbent leadership, AWDU members, the elections committee chair and our international representative from UAW. We need to show that our members will not allow their votes to be thrown out, that the count must be finished and new leadership instated.

For more info, including our responses to the attacks that have been emailed by Daraka Larimore-Hall, see: http://www.awdu.org/ and http://berkeleyuaw.wordpress.com/

[Update Monday 1:49pm]: Occupiers just voted unanimously to remain in the office indefinitely until their demand -- that all the votes be counted -- is met.
Posted by d at 11:15 AM