Update from the Hunger Strike: Day 8 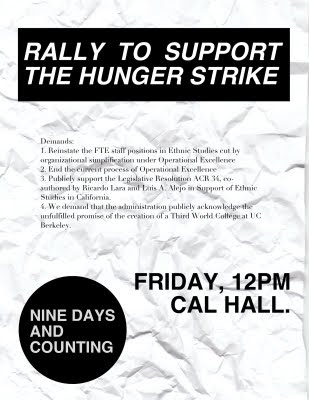 On Wednesday hunger strike in defense of Ethnic Studies at UC Berkeley has concluded its eighth day -- Thursday will be the ninth day without food for the six remaining strikers. Yesterday, after basically ignoring the strikers for a full week, the administration finally agreed to meet with them. The strikers met with two members of the UC Berkeley administration, Vice Chancellor for Equity and Inclusion Gibor Basri and Dean of Social Science Carla Hesse, and once again presented their demands. Of the four demands, two are more symbolic (basically involving the university making a statement) and two are more material (rehiring several laid-off staff members and ending UC Berkeley's austerity program called "Operational Excellence"). Guess which ones the administrators agreed to? Yes, the purely symbolic ones!

After the meeting, the university issued the following statement: 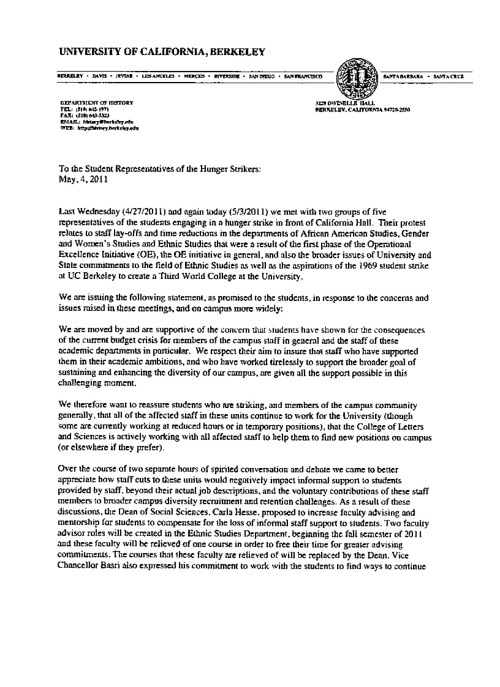 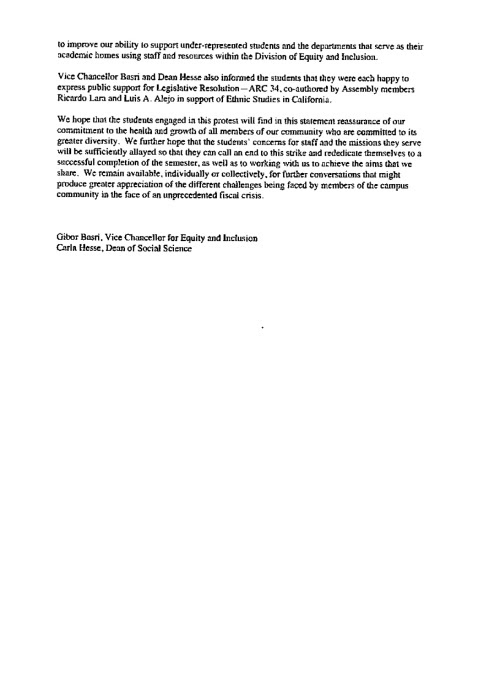 As usual, the administrators' deploy a sort of rhetorical sleight of hand, hiding behind patently false displays of affect. "We are moved by and are supportive of the concern that students have shown for the consequences of the current budget crisis." They make clear that they "respect" the students and go on to "reassure" them that everything will be alright. They note that talking with the students has helped them to "better appreciate" the negative effects of these budget cuts.

Don't worry about those staff members we just fired, Basri and Hesse declare. We'll take great care of them. Don't even think about them. See, we're working really hard to get them new jobs -- though they might be temporary or part time, that is, without benefits. But don't you worry about it, because did we mention that we really appreciate your concerns? Also, to replace those staff positions we've eliminated, we'll simply create two new faculty advising positions! See, it's easy -- we just shift that work onto the plates of the faculty members! We're sure they won't mind -- what else do they have going on anyway? And of course, in conclusion, we'll be happy to issue a statement about whatever you want, just as long as they don't have to actually do anything about it.

If these administrators actually cared about the protesters, their well-being, and their concerns, why would it take them a week to agree to sit down to discuss their demands? If they were actually moved, they wouldn't have had the sprinkler system system in front of California Hall turned on for the past two nights in order to force the hunger strikers to abandon their position.

The strikers understand that. Today, they participated in a protest in support of AFSCME workers at the International House, where workers earn $22,000 a year, are facing speed-up, and experience intimidation by management. During the protest, they were able to hand deliver the following letter directly to Chancellor Birgeneau himself, who has yet to make a single appearance at the hunger strike.

It is with steadfast commitment and fearless determination that we write again. We have sacrificed our own bodily nourishment for 193+ hours and counting to move you to reconsider the current cuts made in Gender & Women's, African American, and Ethnic Studies. The pain we continue to endure as marginalized students and students of Color, fighting for our histories to be taught in an institution which claims to foster diversity, is a pain as constant and gnawing as hunger itself. It has been 7 days since the first meeting with Administrators, and the University has yet to show they are concerned about the physical health of the strikers who have put their lives on the line to defend a department historically attacked, marginalized, and discredited. In order for you to reconsider these cuts we would like to restate and clarify our demands.

2. To end the process of Operational Excellence, specifically the "organizational simplification of OE that is threatening to cut and marginalizes the Ethnic Studies, Gender & Women's Studies, and African American Studies departments.

3. To publicly support the Legislative Resolution ACR 34, co-authored by Assembly members Ricardo Lara and Luis A. Alejo in support of Ethnic Studies in California.

4. We demand that the Administration publicly acknowledge the unfulfilled promise of the creation of a Third World College at UC Berkeley, again.

We acknowledge that you considered the last two demands most feasible, however, to agree to symbolic gestures without solid actions to back up your investment in our departments is to make empty promises.

We will continue striking until we see acknowledgment that all 4 demands which are both well within reach off the UC Berkeley administration and are acted upon in good faith.

In the words of Mario Savio:

Chancellor, Our bodies will continue to grind against this machine until you and your administration take action to stop it. We will not be silenced, we will not allow ourselves to get pushed aside, we will not stop until we are able to study, work and learn as equals to our peers.

We urge you to make a strong material, not just symbolic, offer to our negotiation team.

There will be a rally in front of California Hall on Friday at noon. Come out and support the strikers and their demands!
Posted by d at 12:07 AM