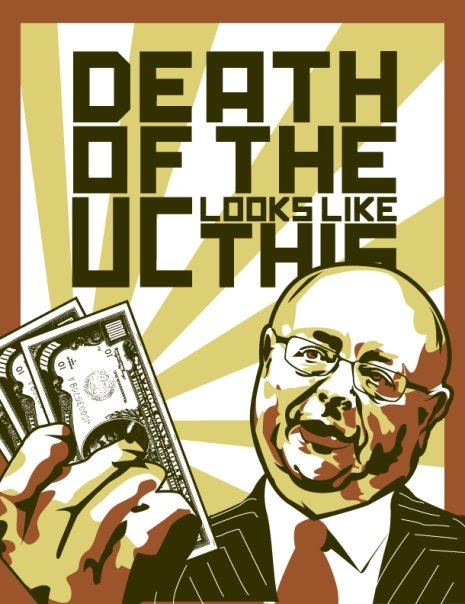 Today and tomorrow the UC Regents are meeting once again at UCSF Mission Bay, certainly the most out-of-the-way and at the same time one of the most heavily policed of all the UC campuses, to discuss cuts in funding from the state in light of the May revision of Governor Brown's original budget proposal, which was released yesterday. While the budget revision is largely being touted in the media as good news due to the fact that revenues have so far been unexpectedly high, a closer look reveals that the crisis remains basically unchanged. $500 million worth of cuts for the UC system, and another $500 million for the CSU system, have already passed the California legislature, and will not be recovered. Furthermore, the budget revision continues to rely on the successful passage of several tax extensions -- an outcome that is far from guaranteed and indeed looks increasingly unlikely.

UC President Mark Yudof released a statement yesterday on the budget revision. In it, he once again stakes out a position not against budget cuts but against more budget cuts:


Today, in issuing a May revision of his budget proposal, the governor also described reductions that would be proposed should the state adopt an "all-cuts" budget in lieu of extending certain temporary taxes.

The governor in his budget document asserted that, in an all-cuts budget, reductions in state funding for the University of California would be doubled, to $1 billion in cuts.

A cut of this magnitude would be unconscionable -- to the university, its students and families, and to the state that it has served for nearly a century and a half.

Doubling the cut would reduce the state's contribution to the university's core funds -- monies that pay professors and staff members, light the libraries, maintain the campuses, and all the rest -- to roughly $2 billion. State funding of UC at this diminished level has not been seen since the early 1990s, a time when the university enrolled 80,000 fewer students.

Yudof's entire argument is based on the premise that the first $500 million is no big deal. It's gone, disappeared, vanished, erased, like it never happened. Let bygones be bygones. What matters, in other words, is not the cut but only the possibility of "doubling the cut." One way of reading this argument is that Yudof is being proactive -- he's getting out there ahead of the curve, to denounce budget cuts before they happen. To a certain extent, that's true. But the problem is that once the budget cuts actually happen -- and they always happen, sooner or later -- they are automatically taken off the table in the name of "being pragmatic." The new budget, with $500 million less, becomes the new baseline against which all future arguments about the budget are framed. Clearly, this is not the way to defend public education. On the other hand, it's a great way to continue to push tuition increases on the public, transferring the burden of debt from the university to the individual student and enabling the university to sell highly rated construction bonds for further infrastructure development.

Yudof goes on to declare that "What this reduction most likely would mean . . . is the need to yet again raise tuition." This statement ignores the fact, to begin with, that an 8 percent tuition increase is already programmed for next fall. Yudof loves to gloss over that increase. In an interview back in March, for example, he asserted that "I’m not planning on recommending a fee hike beyond what is already on the books, which is 8 percent in September." The structure of his claim mirrors that of the statement on the budget revision -- once something happens, it's like it never happened.

The corrupt, unaccountable, millionaire UC Regents aren't going to make any decisions at this meeting. But they've made clear that, in addition to the 8 percent fee hike that will go into effect however much they try to talk around it, they're liable to raise tuition by another 32 percent if the tax extensions in the new budget aren't approved. In that situation, furthermore, the CSU trustees will raise tuition by another 32 percent over and above the 10 percent increase they've already programmed in for the fall. 32 percent, it seems, is the magic number.
Posted by d at 10:51 AM