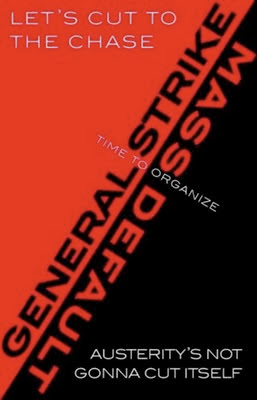 We wanted to note a few important news items that were brought to our attention today, all of which pertain in some way or another to general questions of university governance. First and foremost, as we noted several days ago, today was what the California Professor called "the Ides of May" in that Governor Jerry Brown revealed the revisions to his original budget proposal. There really was no question about whether or not Brown would change his approach and drop the austerity model that has characterized his politics since the 1970s. For Brown, it's all austerity, all the time. 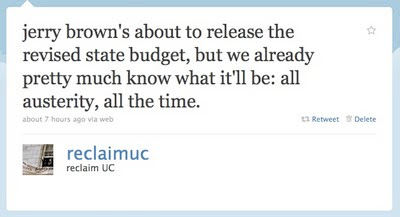 Now, current revenues are unexpectedly high, coming in at $2.8 billion above what was predicted. But Brown, despite some minor changes, is basically sticking to his guns:


I only have a few minutes today to look at the Governor's May budget revision, and here's what I see. Current-year revenues are up $2.8 billion over forecasts, and $6.6 billion over two years. Governor Brown, true to his turnscrew austerity vision of a Hooverite unstimulus for all Californians, increases allocations to no one except K-12 and the community colleges "pursuant to Proposition 98," and, unbelievably, prisons, with a drop for mental health (page 4).

The Regents' strategy of saying that state funding is never coming back has paid off big-time: UC and CSU get exactly zero -- not even a $10 million or $50 million booby prize for not fighting the $500 million cuts. The crappy squeezing of health services is intact (page 3), as is the closing of 70 state parks to save a whopping $11 million this year. There is no wavering of Gov Brown's vision in which the government's one and only priority is reducing the deficit.

Even worse, as Michael Meranze observes, the budget revision still assumes that almost all of the tax extensions proposed by Brown in the original budget will be approved. "In other words, it is still possible that he will end up with an 'all-cuts' budget with even more fierce slashing of the budget for education, health, etc."

Second, as you will no doubt remember, over the last month we've been watching an internal election build up and take place in the UAW local 2865, which represents graduate students in the UC system. Inspired by the generalized protests against budget cuts and the current leadership's absolute failure to provide any sort of resistance to the university administration, the AWDU caucus emerged to challenge the incumbents (calling themselves USEJ, but also known as the Administration Caucus) in the triennial election which took place at the end of April. An attempt at fraud on the part of the incumbents led to a sit-in/occupation of the UAW office in downtown Berkeley; eventually all the votes were counted and AWDU emerged the winners, taking control of every single seat on the Executive Board and almost 60 percent of the positions on the Joint Council. This is a major victory.

USEJ, as you might imagine, is not happy with the results. And now they're trying to challenge them by leveling allegations of fraud against AWDU and demanding what is essentially a do-over! As thosewhouseit points out:


So if you can’t actually win an election with the popular vote, declare it invalid and hope you win the next time around? Look at how ridiculous some of these allegations are.

This is why it is a very serious violation of the Election Committee protocol that one slate’s supporters (AWDU) was left alone with the ballot boxes for 4-5 days, after the elections committee felt compelled to suspend counting on April 30.

The Admin Caucus dominated elections committee suspended the election unilaterally and without quorum. AWDU supporters locked the ballots in a room at UCLA and set up a webcam monitoring the ballots for the duration of the time they were left unattended. There were no AWDU members in there with the ballot boxes. Another crazy allegation:

We can’t believe they have the audacity to try to get this photo clearly taken before the polls opened to qualify as an impropriety. Preposterous. The poll worker is setting up the ballot box before the polls opened for the day. As we’ve explained before, this is pretty obvious if you look at the sunlight coming from the east in the picture. There’s no basis for counting this out of context photograph as evidence of anything, tampering or otherwise. If AC/USEJ can point to any more specific evidence of fraud on display in the photograph that we’re just too dense to comprehend, we’d be happy to hear it. We’re waiting.

We can't hope to cover this issue with the same attention to detail as our compañeros at thosewhouseit, so for the continuing struggle in the union we recommend you check out their blog.

Finally, we wanted to bring your attention to one final update: student-regent Jesse Cheng, who was found "responsible" (i.e. guilty) for sexual battery by the Office of Student Conduct at UC Irvine back in March, has officially resigned from the Board of Regents. (Here is the statement he released.) Note that, as far as we can tell, Cheng was not forced out, but rather resigned of his own accord. Now, we have long argued on this blog that the student conduct process is a disciplinary process that, together with UCPD, constitutes the repressive apparatus of the university. We have seen OSC operate in violation of its own rules and protocols, and furthermore have come to realize that even when it acts according to these rules, its actions are governed by what one critic has called "the rule of the arbitrary." But we have also noted OSC's striking lack of follow-through regarding cases of violence against women, rape, and sexual assault. To us, this confirms our suspicion that the student conduct process operates primarily as a machine for suppressing political dissent, and only secondarily (if at all) to uphold some vague standard of student safety. (Indeed, their standard is not safety at all, but the bureaucratic construct of "health-and-safety.") It is in this sense that the official conduct process for Cheng ended, effectively, without sanction. It is only by extra-official means -- that is, by protest action -- that he was pushed out.

[Update Tuesday 9:49am]: Further thoughts on Jesse Cheng's resignation from Angus Johnston, who compares the leniency in his case with the exorbitant sanctions meted out against the "Irvine 11," who were arrested and punished for speaking out during a public lecture given by Israeli Ambassador Michael Oren:


That Cheng received probation, and was allowed to keep his seat on the UC Regents until he himself chose to give it up, while the Irvine 11 saw the student organization to which they belong suspended and now each face the possibility of six months in jail? That’s not right. That’s not proportionate. That’s not legitimate.

And that disproportion, that illegitimacy, casts the whole University of California judicial system, as well as the UC’s relationship with law enforcement, into question.