Update on the Irvine 11: Gag Orders and Free Speech

Via UC Rebel Radio, we wanted to update folks on the prosecution of the Irvine 11. As you know, these students from UC Irvine and UC Riverside are currently facing criminal charges -- not just the bullshit charges associated with the arbitrary student conduct process -- for participating in a protest during a speech given by Israeli ambassador Michael Oren. They are accused of conspiring to interrupt and then interrupting Oren's speech, charges which could carry a sentence of up to six months in jail if they are convicted. The trial is scheduled to begin on August 15.

This kind of protest happens all the time, and to political figures who are far more significant than Ambassador Oren. For something like this to lead to a criminal prosecution -- let alone the convening of a grand jury! -- is stunning.

In any case, the recent update is that the judge has issued a gag order in order to prevent "potential jurors [from having] preconceived ideas about the case." The gag order applies to both prosecution and defense, but oddly is not retroactive:


Attorneys for the defendants objected to a protective order against them, with one attorney saying their clients "are not similarly situated" with the district attorney's office and therefore should not be subjected to the same limitations.

Attorneys for the 11 also requested that the court mandate the D.A.'s office remove other information relating to the case from its website, including removal of press releases and emails among the defendants that could be submitted to the court later as evidence. The judge denied the request, saying that there is no need to "go back and sanitize" what has already been released.

Obviously, it's impossible to go back and erase what people have already heard. But there is nevertheless something strange about the disproportionate effects of the gag order -- it silences the present while entirely overlooking the past. There's also something interesting here about the way that "free speech" operates. In a case where college students are facing half a year of jail time for allegedly violating the right to free speech of an Israeli politician, the logic of "free speech" demands that (some) speech be silenced, and (other) speech effectively reinforced. It redistributes speech, spatially and temporally. This is where technologies like "free speech zones" and "time, place, and manner restrictions" come into play.

It's also interesting how the politics of free speech often turns on or the legitimation of racism, with regard to both speech and practice. The LA Times article cited above takes a weird turn toward the end:


The defendants also have critics, including prominent Jewish leaders who say they support free speech but believe the students' behavior crossed a line.

Among those who were in the Santa Ana courtroom Friday was Jim Gilchrist, founder and president of the Minuteman Project. Gilchrist, whose organization places civilian patrols on the U.S. border, said he was interested in the case because it related to 1st Amendment free speech rights.

"We need to set ground rules," Gilchrist said, adding that he was "victimized" by people interrupting speeches he's given across the country.

"Louis Farrakhan could speak [to me]," Gilchrist said. "You don't stop people from speaking. I want to talk to the accused and see their point of view."

There's so much going on here. Even if we totally leave aside the claims of white victimization and the odd tokenization of Louis Farrakhan, what's interesting is how the politics of free speech renders some utterances speech and others non-speech. Apparently, Gilchrist recognizes that the protesters have a "point of view," a political argument they want to express. In reality, Oren's speech wasn't prevented, blocked, or suppressed (in other words, the protest was less "effective," in absolute material terms, than the gag order) -- rather, it was delayed, or temporally displaced. And, insofar as all speech is contextual and situated, the protesters' can only make that particular argument in the way they did. It is a fundamentally different speech act to denounce the Israeli occupation while the Israeli ambassador is speaking than it is to denounce it outside the building, or the following day.

Now compare the argument Gilchrist lays out above with this interview he did on Democracy Now. The interview -- well, partial interview -- took place following a speech he tried to give at Columbia University that was interrupted when a group of students rushed the stage and unfurled a banner denouncing anti-immigrant racism. This, it seems, is the sort of thing he calls victimization. (Notably, at one point in the video a minuteman kicks one of the students in the head.) Anyway, what happens in the interview is a sort of back and forth between Gilchrist and student organizer Karina Garcia, except it ends abruptly when Gilchrist bails after Garcia begins to confront him. He just gets up, pulls out his earpiece, and walks off camera.

In this case, of course, Gilchrist doesn't want to talk with the other side and "see their point of view." The point here is obviously not that the head of the Minutemen is an asshole -- it sort of goes without saying -- but rather that the tension in his militant desire to simultaneously hear and silence speech precisely mirrors the logic of free speech more broadly.

One final image: this is what pops up on the screen after Gilchrist cuts the camera in his studio (which is located, notably, in Irvine, CA). Somehow, it's extremely appropriate. 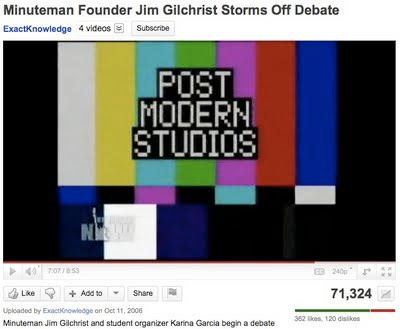 [this post has been edited for clarity]
Posted by d at 3:35 PM