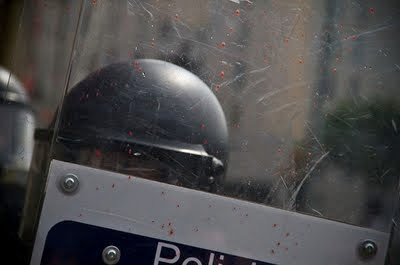 After last Sunday's elections, plazas and public spaces across Spain have continued to be occupied by tens of thousands of protesters. Now, about two weeks after the protests began, the police are finally starting to attack. These images are from the Plaça Catalunya, where riot cops were sent in to evict the occupation, striking with batons and firing blanks and rubber bullets, at about 7 am local time. El país reports that two people were arrested and 121 lightly injured, including 37 cops. Authorities justified the eviction, saying it was for "reasons of hygiene" (motivos de salubridad). After clearing the plaza, the police withdrew. Soon the protesters had returned and retaken the space.