What if they reported on a walkout, but it never happened? 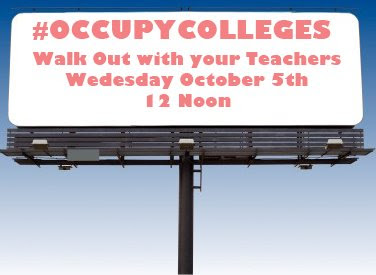 The Daily Cal is up with an article about a 'nationwide' university walkout scheduled for this Wednesday at noon. The walkout was originally called by NYU students, who plan to leave classes Wednesday and then link up with the occupation of Wall Street. They want to take a stand against student debt, which, of course, Wall Street speculates the hell out of. But will anyone outside of New York actually join the thing and ditch classes?

Here's an excerpt from the Daily Cal article that reveals the strangeness of this historical moment:

Occupy Berkeley is one of the many groups joining the Occupy Wall Street network. According to the website of Occupy Together — an unofficial hub for all of the events springing up across the country in solidarity with Occupy Wall Street — there are more than 130 cities forming protests in the United States alone.

It is not clear if Occupy Berkeley plans to join the college walkout planned for Wednesday. However, the group has a scheduled meeting Saturday to discuss the proposal to occupy the area around Berkeley’s Bank of America to promote democracy, according to the Facebook event.

Occupations seem to be cropping up everywhere, and yet some that are called never materialize, and no one seems to know whether anyone is actually organizing for them. They're like ghosts in the social media machine.

What's particularly odd about the phantom walkout in the context of UC Berkeley organizing is that we're actually planning, on the same date and at the same time, a bit of protest theater: a debtors prison flash mob (info below).

Of course, this low-key action is likely to be a minor affair. Though it could get interesting if a few hundred, or even a thousand, students walked out at noon and joined the gathering in front of Dwinelle. There's actually no reason it couldn't happen. It wouldn't even be that hard. Students could tell their instructors Wednesday morning that they planned to join the walkout, and could ask whether the class might take a vote on joining as a group. Maybe twenty or thirty classes would be canceled. And a mass could begin to take shape in front of Dwinelle. Maybe we could start marching. Could reclaim a building on campus, and get going in earnest with another occupation....

UC President Mark Yudof wants to increase fees to over $22,000 dollars in the next 4 years, which will lock out low and middle income students as well as students from marginalized communities. For those who do make it in, a life of debt awaits.

In order to inform the campus community about the current scheme of university privatization as well as to show how the budget cuts are affecting our own personal lives as students and ...workers, the Public Education Coalition is inaugurating what we intend to be a series of flash mobs to inspire the community to creatively fight back.

This Wednesday from Noon-1PM in Dwinelle Plaza, our first flashmob, "Debtor's Prison" will dramatize the burden of debt that students and workers face as a result of fee increases and pay cuts. Participants will mark a circle on the ground around them with chalk and the statement "this is my debtor's prison" and wear signs around their necks with a statement about debt.

Join us and participate in this low-intensity creative action! Chalk will be available for you to mark your own debtor's prison-cell and organizers will be in Dwinelle Plaza with cardboard and markers starting at 11:30am so you can make your own sign.

A zombie-themed flash mob, "Day of the Living Debt," will take place next Wednesday at Noon, location TBA.

For an excellent primer on our future of debt read: http://www.reclamationsjournal.org/pdfs/pamphlet%20debt%20pdf.pdf

In solidarity with the occupy Wall Street Movement and The Affirmation participants!
Posted by a at 11:58 PM