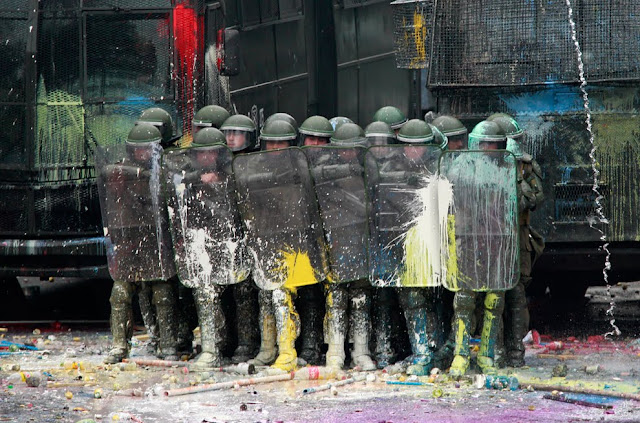 This is a very rough translation of an article in Spanish from Página 12. It's especially interesting in the context of ongoing discussions about "violence" and "nonviolence" regarding the Occupy Wall Street movement and, of course, everything that's taken place in the UCs over the last few years. It's worth remembering that in the US these things are already crimes:


Criticism rained down after the right-wing government led by Sebastián Piñera signed a bill that adopts new criminal charges. The law, which seeks to stiffen measures against public disorder, arrives in the middle of intense social protests, especially the marches and mobilizations carried out by Chilean students over the past five months.

Under this law, protesters who participate in illegal occupations of educational establishments, such as primary or secondary schools or universities, could face a sentence of up to three years of jail time, since it criminalizes the "illegal occupation or invasion of property," including homes and commercial, industrial, religious, or educational spaces, whether public, municipal, or private.

The law constitutes an attack against the primary instrument of leverage that the student movement has used, having forced the end of the school semester because of the government's failure to make advances in negotiations. The initiative also aims to punish the lack of respect toward police officers, regulate the sanctions for incendiary bombs, and make it an aggravating circumstance to wear a mask.

"Whosoever attempts to disrupt the tranquility and normal life of citizens or to attack public or private property will face strong and firm legislation establishing punishments that correspond to criminal acts," said Piñera, in an attempt to fulfill one of his campaign promises: to reduce criminality in the country. Polls show that the public continues to judge him harshly in this area.

"We are going to pass this project on public disorders as fast as possible," added the Interior Minister, Rodrigo Hinzpeter, yesterday, generating more criticism from student and opposition leaders. "Public disorders are going to be a crime. And when, with force, with violence, there is looting, occupations of public or private buildings, among them hospitals, educational or religious establishments, streets, or public services, these are going to be crimes... We must keep minorities from kidnapping the rights of the majority," added Hinzpeter.

In this context, the president of the Federation of Students of the Universidad Católica, Giorgio Jackson, said that the measure "responds to a logic of looking at the symptom and ignoring the disease. I feel from what is being attacked that once again what is happening here is a superficial approach to the issue."

He added that he had participated in the occupation of his university and "it was absolutely peaceful, in which students together with workers and professors developed work plans on art and culture. In no way would I think that this represents a criminal attitude. These laws, which will probably lead to repression, have to be carefully reviewed, and each case has to be analyzed separately. The spokesperson of the Confederation of Chilean Students (CONFECH), which organizes traditional universities, insisted on local radio that "occupying schools and stopping classes has never been a hobby. Rather, it's a reflection, a shout and a call to the authorities, and in this case the entire city, to reflect on the issues of marginality, segregation and other social problems that are being experienced in our country."

Judges also entered the fray, after Piñera explained that the bill would call into question the rights of those charged with aggression against police officers. The president of the National Association of Judges, Leopoldo Llanos, declared these statements as "improper," because of the fact that they interfere with "the jurisdiction of other public powers."

Finally, part of the opposition agreed that this yet another sign of the government's failure to understand what is going on, since it once again reiterates its view of the phenomenon as "eminently subversive" just at the moment when dialogue with the students has begun, according to opposition member Pepe Auth.