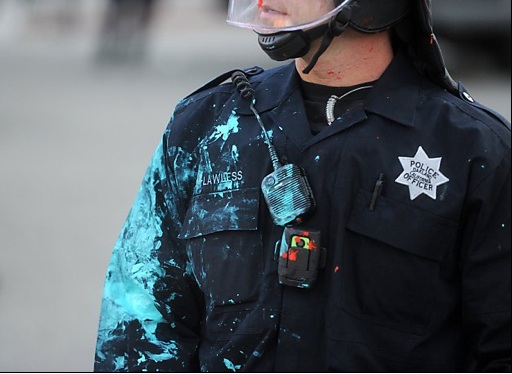 The following statement was made at last night's Occupy Oakland general assembly. It went over really well:


I want to preface by saying that many of you are new to Occupy Oakland, many of you are white and middle class. This means you have most likely not experienced police violence in the same manner as those who are queer, people of color or poor. As this movement grows, we ask for respect of our lifelong experiences and the recognition that self defense is not violent.

This Saturday evening, nearly a year after the murderous pig Johannes Mehserle was sentenced with a slap on the wrist and just days after police beat, gassed, shot, kidnapped and hospitalized our fellow occupiers, we are calling for a march against the police state. We encourage everyone to wear black in memory of all those who have been murdered by the police. In the name of Oscar Grant, Raheim Brown, Kenneth Harding, Charles Hill and our countless martyrs, we will march this Saturday, immediately after the Speak out from 6-8pm.

March against the police state.
Justice for Scott Olsen.