On OWS, and what it means to 'make connections' 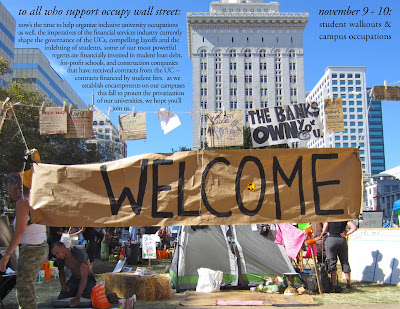 The following statement in support of the wall street occupation is currently circulating amongst UC faculty. At the moment, it has more than 600 signatures:

We, members of the faculty of the University of California, write in solidarity with and in support of the Occupy Wall Street movement now underway in our city and elsewhere. Many observers claim that the movement has no specific goals; this is not our understanding. The movement aims to bring attention to the various forms of inequality – economic, political, and social – that characterize our times, that block opportunities for the young and strangle the hopes for better futures for the majority while generating vast profits for a very few.

The demonstrators are demanding substantive change that redresses the many inequitable features of our society, which have been exacerbated by the financial crisis of 2009 and the subsequent recession. Among these are: the lack of accountability on the part of the bankers and Wall Street firms that drove the economy to disaster; rising economic inequality in the United States; the intimate relationship between the corporate power and government at all levels, which has made genuine change impossible; the need for dramatic action to provide employment for the jobless and protect programs such as Social Security, Medicare, and Medicaid, in part by requiring the wealthy to pay their fair share of taxes; and the disastrous effects of the costly wars that the United States has been conducting.

Only by identifying the complex interconnections between repressive economic, social and political regimes can social and economic justice prevail in this country and around the globe. It is this identification that we applaud, and we call on all members of the University of California community to lend their support to the peaceful and potentially transformative movement.

A question this statement raises, and partially addresses, is how the occupy wall street movement could give way to large-scale social transformations. The petition suggests that a commitment to make connections between particular moments of social antagonism is a precondition of such transformative force, and it commends the wall street protesters for "identifying the complex interconnections between repressive economic, social and political regimes."

This seems right to me, as far as it goes (even if it's perhaps overly-optimistic about the politics of many OWS encampments). But we'd want to ask what the signatories and authors of this statement mean by "making connections." Is this merely a matter of slogans and speeches (i.e. the relatively public and programmatic acts of speech and writing associated with the movement)? Or does it also involve connecting the bodies and psyches of those fighting different forms of oppression, those caught up in previously discrete spheres of antagonism? Does it mean, for instance, enabling students to recognize their ties to those engaged in exploitative service/care work, and to realize forms of mutual solidarity with such workers? Or might it mean taking inspiration from dock workers who've often acted against police violence, mass incarceration, and the colonial occupation of Palestine?

It's worth proposing then a slightly expanded account of what it would take, in our moment, for the wall street protests to give way to large-scale, emancipatory transformations.

Three preconditions for such transformations are: the spread of Wall Street-style plaza occupations to new locations; the linking up of such occupations with mass strikes, seizures, and mutual aid efforts carried out across a range of social sites, including universities and other workplaces; and the undoing of repressive state forces. Not only are these preconditions for broader, emancipatory transformations, but also for the survival of the occupy wall street movement itself. As we saw this week, city and state governments will temporarily call off their armed agents only if they are afraid of an intensification and expansion of plaza occupations.

If stasis sets in, the state will move against us.
Posted by a at 11:41 AM