Call for Witnesses from September 22 Day of Action 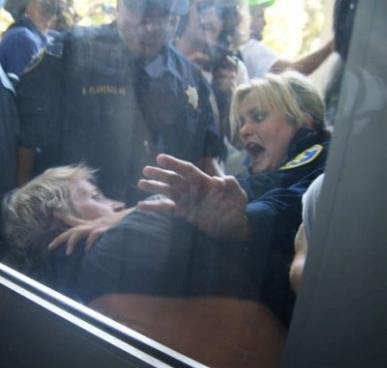 On September 22nd, during the Day of Action demonstration at University of California Berkeley, two people were arrested and have been charged with misdemeanors by the Alameda District Attorney's Office. Drew Phillips, 25, was arrested and charged with battery on a peace officer with injury, wearing a mask in a commission of a crime and resisting arrest. The incident took place at the entrance to Tolman Hall after police rushed the demonstrators and pepper-sprayed a number of students. His lawyer, John Hamasaki is looking for anyone who witnessed the incident or has any photos or videos of the incident. Contact him at john@hamasakilaw.com.

Richard Dereck Clemons (arrested UC Berkeley, Tolman Hall, East Wing) is charged with Battery on Peace Officer, Resisting Arrest, Escape from Custody, all misdemeanors. Anyone with any information should email his lawyer at m.kamran@bourdonlaw.com.
Posted by d at 1:17 PM