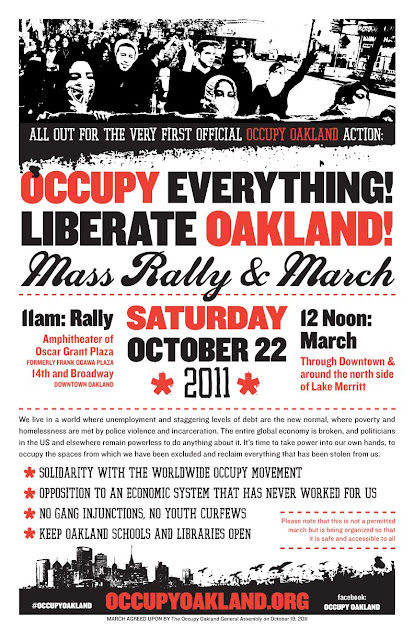 All out for the very first official Occupy Oakland action

12 noon March
Through Downtown & around the north side of Lake

We live in a world where unemployment and staggering levels of debt are the new normal, where poverty and homelessness are met by police violence and incarceration. The entire global economy is broken, and politicians in the US and elsewhere remain powerless to do anything about it. It's time to take power into our own hands, to occupy the spaces from which we have been excluded and reclaim everything that has been stolen from us.
- Solidarity with the worldwide Occupy movement
- Opposition to an economic system that has never worked for us
- No gang injunctions, no youth curfews
- Keep Oakland schools and libraries open

March agreed upon by the Occupy Oakland General Assembly on October 19, 2011
Posted by d at 10:16 AM