The following statement was given by Professor Joshua Clover during the rally at UC Berkeley campus on March 1. From there, approximately 200-250 people marched down Telegraph to Oscar Grant Plaza in downtown Oakland where they converged with students from Laney College for another rally. Later in the day, a small group broke off to begin a 99-mile march to Sacramento. 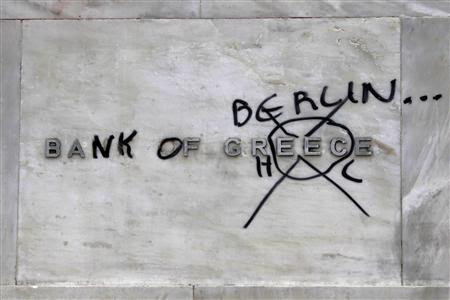 I was asked to speak about banks and education and I will get to it swiftly without any fancy language. We are here in part to begin a march. It is a march on the seat of government, against intolerable austerity programs that are being imposed by force. This has become a familiar, almost a common event of late. The most dramatic such recent episodes that we have seen have been in Greece, in Athens, a place from whence we draw our farthest histories of education. But we must also draw our nearest histories of the political. Our history of the present also comes from Athens.

In Greece right now, intolerable austerity is being imposed by the economic state and its armed wing, immiserating the people so as to pay an unpayable debt to a global array of financial institutions. There is, in short, a collusion between the state and the banks. The people are being increasingly indebted to the banks even as they cannot afford food and shelter, and this is being done through the militarized mediation of the state.

This is precisely what is happening here as well. Rather than the sublimely dispiriting rain of facts and figures, I want to sketch the process, the mechanism, in five easy steps.
So I will make the most obvious point: banks don’t make it easier for people to go to school, they make it harder, by enabling massive fee increases. Banks make school more expensive.

But that’s only part of it, of course — the front end, you might say. They get you coming and going. Not only do banks drive up costs, they now on the back end own a trillion dollars worth of the future lives of students. That’s what debt is — they own your hours, period. And that decides your life for you. They know what you’ll do next summer. And the one after that. And the twenty years after that.

If the university’s purpose is to help people move from necessity to freedom — be it political, intellectual, or economic freedom — their collusion with the banks actually and obviously makes you less free. So: the university and you: more expensive, and less free. This is the outcome of the university’s lying down with capital. It preserves itself by selling your and your families’ lives to the bank — by enabling financial profits. As in Greece, so in California: this is the state now.

But here’s the thing I want to say before I go. This problem I have just described is not a false problem. It is not some free decision made by misguided people who can be convinced to see the light and change direction. It is a consequence of objective conditions of the economy and the political situation. Whether we accept that the money finally isn’t out there and isn’t coming back — or whether we accept that one cannot ascend to the seat of government without being irrevocably beholden and committed to this program of exploitation and profit — either way, I do not believe that the situation I have just described can be in any way changed via demands for redistributing the present budget, by demanding a kinder and gentler capitalism.

And this carries me back, as we so often find ourselves carried back, to Greece, to Athens. I say to you today, those of you burning with anger and love and desperation who will commence the long march to the seat of government and those who will stay here, burning just the same, I say to you, MAKE IT GREEK. MAKE IT GREEK. In Greece they have understood, just a few moments faster than we have, that the money isn’t coming back. That the banks and the state are not going to release the people from beneath the boot-heel of austerity. That debt to the banks will be carved from the hides of students, of those who labor, and of those who cannot find jobs. That there is no rescue within this system, within the shock doctrine of austerity capitalism.

So when they march on the seat of government, they do not do so to issue entreaties for a better deal. They do not march to petition for redress of grievances. They do not march to seek out an idealistic equality that simply is not and cannot be a feature of this disaster that is capitalism. They march to burn it down. They march to burn it down. Along the way they pause at banks — in memory of the fact that every revolution has featured, among its earliest acts, the destruction of debt records, because debt is the financial form of unfreedom. And they burn down the banks.

And I say they are not mistaken. I say that their analysis of the real situation is lucid. Inarguable. Perhaps even obvious. Let us enter this history, let us illuminate it, let us make it present. I say: we are all Athenians: MAKE IT GREEK, BURN IT DOWN.
Posted by d at 1:24 AM