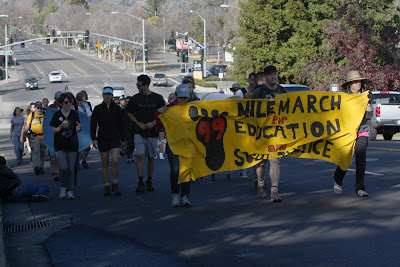 We started out from Vacaville early this morning. People were in good spirits but were dealing with more serious soreness and blisters on this fourth day of the march. A couple of people decided to take off their shoes and walk only in socks to avoid aggravating their blisters as much as possible. Initially we passed through residential neighborhoods and commercial areas, but soon we were in the countryside.

Generally today we traveled through farmland, zigzagging first east and then north and then east again along Route 80. We made good time throughout the day, though we spent a fair amount of time for lunch resting and talking with a group of people who had driven up from the Bay Area to take part in the final leg of the trip.

The day was marked by scattered heckling. At one point a woman standing in her door shouted, “I'm an American citizen; you all aren't” and waved her hand as if to shoo us away. Later a man standing in a field addressed us on a bullhorn, telling us we should get jobs. He also said we were lazy, which provoked some laughter within the group. At another point, a group of young people told us to get a job. Sometimes people in cars flipped us off as they drove by. Overwhelmingly the people we passed expressed support, but the scattered heckling gave the day a sightly colder edge.

Some of the most meaningful and fun encounters occurred as the sun was setting and we were walking along a road heading east. At one point, we saw a man walking with a child on his shoulders all the way across a field to meet the march. When he got to the road, he joined a woman holding a young child in her arms. Some of the members of our group paused and spoke to them. That encounter was reminiscent of some earlier moments, such as the time when we passed a woman holding a young girl's hand up to wave at us for the whole time the march went by. Later down the road, a marcher passed out pamphlets for the capitol occupation in Sacramento tomorrow, speaking in Spanish with people who had gathered in their driveway.

As we approached Davis, I was thinking some about how meaningful it was that the route of our march linked together two UC campuses whose occupations and assembled students had endured severe police repression last fall, and where significant student strike actions against debt and privatization had been staged.

Thinking back to the gathering on Saturday at Solano Community College, however, I also started reflecting on how this march, which was organized largely by San Francisco State students, was not primarily a UC action. I remembered how, when the group gathered on Saturday to articulate what we were marching for, many supporters and marchers talked about how -- as community college and CSU students – they were unable to complete degrees or credit requirements within a reasonable number of years because of recent severe cuts to course offerings. Some talked about working multiple jobs to pay for tuition or about facing devastated job markets upon graduation. Some also talked about the severe inequities at the K-12 level that have reverberated throughout the entire education system. This multi-day action brought students from different sectors of education together in a way I haven't experienced before. I hope the bonds forged on the march will enable us to continue to build more thoroughly cross-sectoral education movements.

As we entered UC Davis, the energy of the march grew. As we moved through the campus, we started chanting louder than we had all day. Some of the chants included “No cuts, no fees: education will be free,” “We demand (we don't ask) education for the working class,” “This movement's unstoppable; occupy the capitol,” and “We won't stop; we won't rest—education's in distress.”

People from Occupy UC Davis and other friends and supporters of marchers had set up extra tents for us on the UC Davis quad where the local Occupy movement encampment is located, so when we finally arrived, we marched into an area dotted with roughly forty pitched tents. Local Occupy members were playfully hiding in the tents when we arrived, and they emerged from the tents to an exhilarating scene of rejoicing marchers in the quad. Occupy Davis had prepared an abundance of amazing food, including homemade tamales, pasta salad, rice and beans, green salad, pecan pie, and apple pie. After dinner we met briefly to discuss plans to build a mass occupation of the capitol in Sacramento tomorrow, and then most of the group headed to bed.

We encourage anyone within commuting distance of Sacramento to join our protest for public education at the capitol tomorrow! There will be a mass march beginning at Southside Park at 6th and T Streets at 10 a.m., a rally at the capitol at 11 a.m., a general assembly and nonviolent direct action training at 3:30 p.m., and a rally on the north steps in solidarity with the “Occupy the Capitol” action at 5:30 p.m.
Posted by a at 1:44 AM