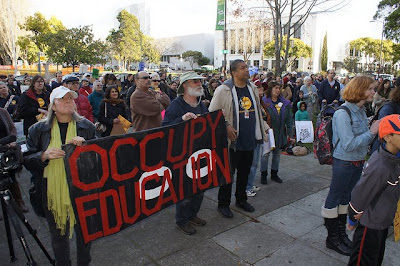 Roughly 50 students, teachers, and community members embarked today on a multi-day journey from Oakland to Sacramento as part of the ongoing struggle against the dismantling of public education. Here are some highlights from our first day on the road:

The rain had cleared up by the time we left Oscar Grant Plaza in Oakland, where we rallied for public education with a few hundred people this afternoon. We set off carrying a huge yellow banner painted with the words “The 99 Mile March for Education and Social Justice.” One young man has been marching with a boom box, playing hip hop.

Most people on the march are in their twenties, but there is also a contingent of older people, including teachers and parents. There are many SF State students involved, along with students from UC Berkeley and other schools.

While we were marching from Oakland back to Berkeley High, someone remarked that it's really exciting how unexpected, transient alliances continually take shape during the march as people respond positively to our protest as it passes.

Today some people joined the march and started chants from the side. A woman at a bus stop told us to stay safe on our way to Sacramento. Two young people walked with us for five blocks in Berkeley with their basketball. Cars honked their horns the whole time we were walking through Richmond. People often gasped when we told them we were going to “Sacto.” A group of guys in Richmond said they wanted to join the march and came along with us for a number of blocks, talking and walking with us. A group of people in their backyard in Richmond started a chant for us as we went by. A woman joined the march in Richmond and started one of those chants that goes “olé olé olé olé olé.” These unexpected, brief moments of affiliation and connection made the day feel meaningful—we are connecting to new people and talking about what we are doing.

A central experience of the day involved getting a sense of how the fifty or so marchers could move on the road together—how fast, how many lanes we could occupy, how to communicate with each other, and how to manage risks connected to the traffic flows. As we walked, we circled through different conversations with different people and overheard snatches of all different conversations. People were introducing themselves to each other and talking about history and the different social movements that they have learned about or been part of, such as anticolonial movements in the United States. There was talk about different group dynamics at the Occupy encampments—for example, what happens when some people want to kick someone out and others don't.

There is a rolling, fluid quality to this sort of movement, both in terms of the pace of the march and in terms of how people move from one place to another and introduce themselves to one another.

We marched more than twelve miles and arrived in Richmond after 8:00 p.m. at Saint Mark's United Catholic Church. Local community groups made enough burritos to feed our whole group. We are sleeping in classrooms at the church tonight.

A couple of people from Occupy Richmond came to talk with us tonight about the different kinds of work they've done. They've been very involved in support work for Occupy Oakland. Somebody affiliated with Richmond Spokes said one central issue for Occupy Richmond is the pollution that has been introduced by Chevron in this area. The atmosphere and environment in Richmond is significantly more carcinogenic than in other parts of the Bay Area. He said a study on librarians found that 30 percent of librarians in Richmond develop breast cancer, which people think is tied to the pollution introduced by Chevron.