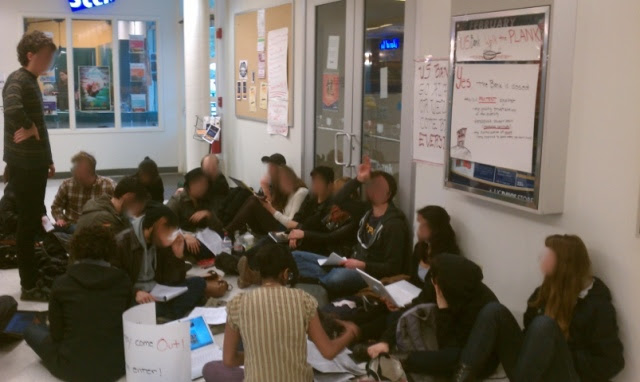 From the Bicycle Barricade:


On March 12, the parasitic US Bank notified its hosts customers that, as of Feb. 28, it had officially closed its UC Davis branch.

The bank’s closure was the result of a quarter-long blockade, in which an autonomous direct action group effectively prevented bank operations.

The successful blockade is clear proof of the efficacy of direct action, in which a committed and organized group, willing to place its “bodies on the gears, . . . upon all the apparatus” can achieve victories against the capitalist system that transforms our classrooms into spaces of exploitation and forces us to sell our lives, our futures, to bankers and profiteers.

This action was part of an ongoing campaign to free the university from the grip of capital. Every space we retake from the managers, the bankers, the administrators, and the self-elected résumé polishers of ASUCD represents a step towards the autonomy required to transform this corporate university into the people’s university.

We celebrate this victory by planning our next action and restating our intention to remove the chancellor and police from our campus as a necessary step towards liberation.

Needless to say, the UC Regents aren't happy with this development. Their lawyer recently sent off a letter describing in detail the many efforts they made to get US Bank to stay. They really want the banks on campus. Above all, the Regents were hoping for US Bank to help them deal with the protesters -- as the letter states, "The Regents repeatedly asked for the Bank's assistance and collaboration in addressing the problems created by the protesters, and the Bank has either refused to provide such assistance or has delayed responding in a manner that has caused reasonable suspicion that the Bank was not genuinely interested in maintaining a long-term presence at the Davis campus." The bank, apparently realizing this was a losing battle and recognizing the potentially disastrous PR implications, was "unforthcoming in dealing with the Regents' representatives in Davis."

Pobrecitos, no one to bail you out this time...

[Update 6:01pm 3/18]: For a more detailed analysis of the Regents' letter as legal argument as well as a related statement from US Bank and the original contract, see this pro bono legal advice for the UC Regents.
Posted by d at 8:27 AM