No Limit for Student Debt

Two weeks ago, Congress passed an all-cuts deficit reduction bill, which was ostensibly tied to an increase in the federal debt ceiling. While much of the commentary about this bill, including in the left-liberal press, suggested that the 1.7 trillion in cuts was a result of Republican intransigence and Executive fecklessness, in truth, the austerity was driven much more by the bond rating agencies, who were threatening to downgrade US debt unless our federal representatives carried out an initial round of fiscal austerity. The agencies got their cuts, but S&P went ahead with the downgrade anyway. The other two agencies -- Moody's and Fitch -- are holding their fire for now.

If nothing else, this debt ceiling & debt rating debacle should crystallize for a transnational public the fact that the bond rating agencies determine the parameters of our politics -- a lesson that those of us fighting UC privatization have come to learn over the past couple years. What finance capital wants -- whether that be fee hikes or fiscal austerity -- it gets.

Buried in the debt ceiling bill was a measure to essentially end subsidized loans for graduate students. Under the previous federal loan regime, graduate students were not responsible for paying interest on their loans while they were still in school (and struggling to pay the rent). Starting next summer though, we'll be paying that interest. According to the sage coalition, the shift from subsidized to unsubsidized loans will increase the total loan burden of a six-year grad student by over 25%. And, given the current state of the academic job market, this is another few thousand dollars in debt that we'll have little chance of paying off. 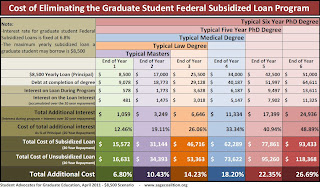 Nevertheless, as the journalistic reports on this measure invariably pointed out, 'there was a bit of good news' hidden in the cuts to subsidized loans. Some of the money saved by the federal government on loans to grad students will go to pay for Pell Grants, which otherwise would have suffered further cuts. So it could have been worse. And yet, it's important to remember that Pell Grants are being funded because of effective lobbying efforts by for-profit colleges, much more so than because of a shared commitment on the part of our political class to educational equity. For-profit colleges receive massive amounts of Pell Grant funding, despite abysmal dropout and placement rates for their students. And they have one of the best-funded federal lobbying efforts of any industry. As Bloomberg reported in April:

For-profit colleges, led by Apollo Group Inc. (APOL)’s University of Phoenix, will be disproportionately hurt by cuts in the $30 billion Pell Grant program for low- income students. Pell Grant aid to for-profit-college students grew almost eightfold in the past decade to $7.5 billion in 2009-2010, and now accounts for 25 percent of the funds, according to the U.S. Education Department.


While there is much more to say about for-profit schools, it's important initially to note that these schools are the apotheosis and inevitable outcome of educational privatization. In California, for example, recent tuition hikes at the UCs and CSUs, coupled with class cuts at Community Colleges, are all compelling low income students and students of color to turn toward for-profit colleges, despite the fact that these schools rarely offer the educational experience that they advertise. In other words, regressive reforms at one node of the educational system reverberate throughout this system, affecting all students.

While the UC student movement has not yet adequately recognized how our fight is linked with fights taking place elsewhere in the educational system -- something on the agenda for the coming year -- the UC Regents are quite aware of these interconnections. After voting for the 32% fee increase in the fall of 2009, Regent Richard Blum directed his investment firm to buy stocks in for-profit schools. From an article in Reclamations 2:

As student fees continue to skyrocket, it is well to keep in mind that Blum is a part owner of a pair of for-profit education companies. Blum Capital Partners owns the largest stake in Career Education Corporation, the world's second largest private “diploma mill” corporation, which runs more than one hundred for-profit schools across the country, while also making tens of millions of dollars in sub-prime loans to its students. Blum Capital also owns a 19 per cent stake in ITT Educational Services, Inc., another for-profit school that makes millions off student loan debt. Blum, the UC Board of Regents' resident siphoner-in-chief of public funds, purchased more than 220,000 new shares in the firm soon after the UC Regents approved the University of California's latest fee increase this past November.


This is why we fight the Regents.