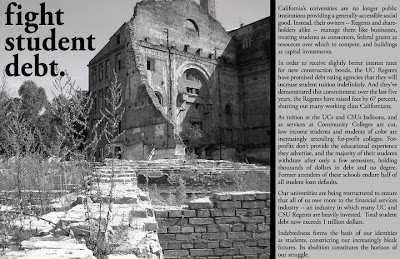 Here's a new flyer for organizing around debt at the UC (and, with a little adaptation, at CSUs and CCs. But how does one go about abolishing something like debt? Well, for starters, by engaging in a politics of mass default. This is, of course, already happening. Whether we do anything about it or not, people are defaulting on their student loans in greater and greater numbers. . . But because student loans are guaranteed by the Federal government and its police powers -- meaning that the Treasury will pay back bank lenders if we default -- the State treats this as essentially akin to failing to pay taxes, and uses its full powers to recoup the money: wage garnishment, bank account seizures, even repossessions.

Therefore, to keep this from becoming the expression of individualized despair, we need a manner of rendering default not only visible but also offensive -- an attack, an act of expropriation, rather than a choice one is forced into after many insults and injuries. This means more than a website advertising a campaign of debt default. It means networks of mutual aid which we can use to help each other out in the event that we become the victims of the state's attention. But it probably also involves a politics of attack, targeting the institutions responsible for our increasing indebtedness.

Universities are, as the above poster indicates, one of these institutions, since they essentially use students as borrowers of last resort. They know that, given the wide availability of student loans, they can always raise money by raising tuition. When they borrow money that they can't possibly expect to pay back, they are essentially making it so that we pay it back for them.

Debt is, of course, the political watchword of our time -- a time when riots in Greece can measure their own power by the effect that they have on Greece's bond rating (that is, the extent to which Greece's lenders think it likely the antagonist forces there will force the country into default). Debt, therefore, is an index of political antagonism.

If you're looking for an interesting, and much more expansive, take on the political economy of debt, see David Graeber's new book -- Debt: The First Five Thousand Years (excerpt here). Drawing on anthopology, ancient history, and all manner of social theory, Graeber attempts to suggest that money, markets and economics originate with debt, rather than the other way around. For Graeber, money was first credit money and then only later cash or coinage. But unlike our current credit economy, these early credit economies had extensive protocols for the erasure and forgiveness of debt, in order to ward off the kinds of inequality that would bring such civilizations into crisis. . . There is a great deal of questionable argument here - as is often the case with Graeber -- but it's a highly provocative, erudite and insightful read. One can learn a great deal from it.