Segregation, Public Transport, and the Murder of Kenneth Harding

Bayview/Hunters Point is spatially and socially isolated, experiencing a sort of de facto segregation, from the rest of San Francisco. This separation, of course, is not a natural phenomenon but closely tied to a series of economic processes and, crucially, state planning (e.g. housing policies and the military-industrial complex). The fixture that has dominated the neighborhood through both its presence and its absence is the Naval Shipyard. Established in 1941, it generated thousands of jobs while at the same time poisoning the land, pushing out other businesses and industries, and establishing a firm economic dependency, which has continued to shape the neighborhood since the shipyard was decommissioned in 1974. Transportation has played a central role in cutting Bayview/Hunters Point off from the rest of San Francisco, erecting immense concrete barriers (the 101 and 280 freeways) and limiting paths of communication and access points (generally poor public transportation). It's no surprise that, as the above linked history points out, most San Franciscans have never been there.

Segregation doesn't only consist of physical walls or explicitly racist policies, but is also embedded in the structures and flows of the cityscape as well, in bridges, crumbling building facades, liquor stores, and, in this case, MUNI rails. This is one of the critical questions raised by the recent police murder of 19-year old Kenneth Harding, who was shot 10 times by police officers as he ran away from a fare inspection. While the mainstream media gets carried away breathlessly reporting (and later retracting) every new detail that SFPD feeds them, we are more interested in other questions: Why does SFPD patrol the trains in Bayview, while in the rest of the city the work is done (if at all) by simple fare inspectors? What insights do we get from understanding the murder as stemming first and foremost from a fare inspection?

In Bayview, the T-Third MUNI line functions as a gateway to the rest of San Francisco. Especially for youth and others who don't have access to cars, it's the primary path toward downtown and by extension to the rest of the MUNI grid that crisscrosses the city. Guarded by armed police officers who, we now know, are ready and willing to use their weapons, the Bayview MUNI station operates as a militarized checkpoint that serves as a form of population control, regulating the flow of primarily black youth into but most importantly out of the neighborhood. Even the police identify it as such. As the police chief has explained, fare inspections have been stepped up recently as a way of confiscating guns from Bayview residents who ride the trains. Fare inspections, in other words, are explicitly not about making sure people pay their fares. Rather, what they do is give the police an excuse to detain, search, and criminalize black youth in the moment that they attempt to navigate an urban landscape that has been closed off to them.

Segregation also rests on particular social relations -- again, to be clear, most San Franciscans have never even been to the neighborhood. Part of what's been so successful about the recent demonstrations against police terror in and around Bayview is not only the solidarity that they manifest but more importantly the high level of participation by residents of different neighborhoods in every action. Folks from Bayview turned out to the demo in the Mission last Tuesday; likewise, folks from the Mission and beyond have showed up at press conferences and rallies in the Bayview. Of course, the specter of the "outside agitator" (as imagined by both city officials and institutionalized non-profits) is never far off. But what seems to have characterized these moments of collaboration is something very different, a coming-together based on a recognition of points of commonality in the struggle against the police as enforcers of an unjust economic system. That such a convergence would arise doesn't require that everybody involved experience the same forms of violence -- of course they don't, and to suggest they do would be to purposefully ignore different manifestations of class/gender/race/etc -- but that they perceive the overlaps even within those differences. 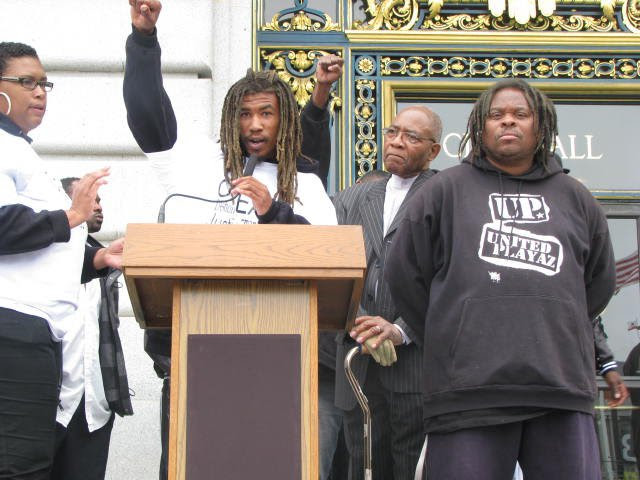 This is how we should read the arrest of Fly Benzo (Debray Carpenter), a Bayview resident who has been one of the most vocal and visible critics of SFPD in the wake of the Kenneth Harding murder. Watch videos and you'll see his face; look at the SF Chronicle and you'll see his name; he was interviewed on the local ABC affiliate. His analysis of the situation, furthermore, is sharp; as he told the Chronicle:


"We need to shut down the T line until we get answers to our demands -- no police on trains, free trains or no trains at all. We'll make sure there are no trains at all if that's the way they want it."

Once again, it comes back (especially now, in the broader context of austerity) to public transportation, the trains that connect Bayview with the rest of the city. But if segregation also appears in the form of social relations, then the arrest of Fly Benzo -- a bridge between dispersed actors organizing around police terror -- represents yet another attempt to violently reinforce the segregation that has plagued Bayview/Hunters Point for decades.
Posted by d at 4:36 PM